A group of folks connected with the Yates County, New York Historical Society came to Antietam on Saturday. It was my privilege to host them and share the story of America’s bloodiest day with them, but even more to learn from them! 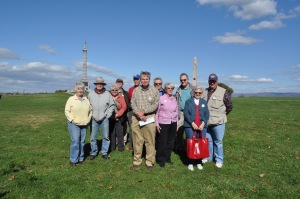 To be truthful, I had to look up where Yates County, NY was located! It is in the Finger Lakes region of the state. The closest I’ve ever been to that area is Watkins Glen on several occasions as a child, and I remember well what a beautiful region of the country it is.

The particular interest of these guests centered around two specific regiments from their region: the 33rd and 126th New York.

The latter of these (126th) fought on Maryland Heights overlooking Harpers Ferry, and as a result of terribly poor upper leadership and a series of unfortunate circumstances were among those captured and paroled.

However, the 33rd NY was at Antietam as a part of Irwin’s Brigade of Franklin’s 6th Corps. Their action was with an advance toward the West Woods from an area just north of where the Visitor’s Center and the NY State Monument stand today.

An interesting story from the 33rd is that of Medal of Honor recipient John J. Carter, of whom the citation reads:  “While in command of a detached company, seeing his regiment thrown into confusion by a charge of the enemy, without orders made a countercharge upon the attacking column and checked the assault. Penetrated within the enemy’s lines at night and obtained valuable information.”

A typical 2.5-hour tour such as we generally offer at Antietam affords the guest a very good overall view of the battle. We especially feature the three prominent movements of the day: the Cornfield, the Bloody Lane, and the Burnside Bridge. However, there are hundreds of other actions and interesting vignettes occurring all day on September 17, 1862 that get scant recognition. And the actions of the 33rd New York remind me of this.

Among the dozen guests in the group yesterday was Wayne Mahood, author of “Written in Blood: History of the 126th New York Infantry in the Civil War”.  He has also written biographies on James Wadsworth and Alexander Hays, among other works. Also a part of this contingent is George Contant, author of the history of the NY 33rd entitled “Path of Blood.”

This is a beautiful time of the year at Antietam… here is a view looking into the West Woods and the Philadelphia Brigade Park: 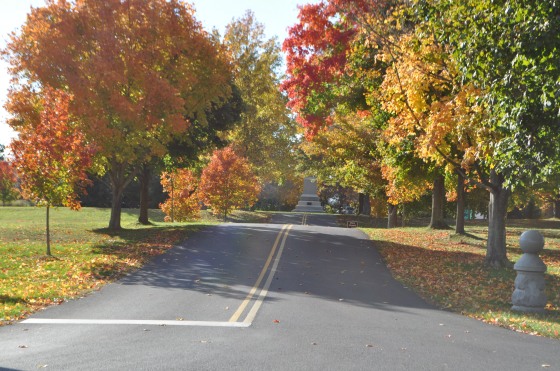