Army Life Near Sharpsburg after the Battle of Antietam

This is the seventh in a series of blog posts past and future that relate the words of various writers about their experiences in the weeks after the Battle of Antietam. Today I return again to George F. Noyes’ remarks from his 1863 book “The Bivouac and the Battlefield.”  I remind the reader that he was a part of the staff of Abner Doubleday and thus a part of Hooker’s 1st Corps … which is relevant to the account shared here today. Noyes wrote:

Our headquarters had thus become in itself quite a village, located nearly at the extreme southwestern corner of the battle-field. A few hundred feet in front was the headquarter camp of General Meade, now in command of the corps, and our division was encamped by brigades through the woods directly west of us. < If Noyes is accurate in his description, this would put their camp south of Sharpsburg and along the path that A.P. Hill’s men took on the 17th when arriving at the field in the late afternoon. >

The problems of being idle 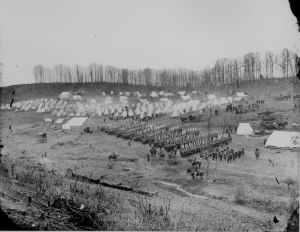 A game of cards is well enough in its way as an occasional pastime; but, if this be the only resort, it is apt to degenerate into gambling, out of which grow quarrels and the acquisition of bad habits not easily overcome. I have very seldom seen our troops playing base ball or indulging in any athletic sports; hidden away in the woods, with no companions of that sex without whose influence man becomes rough and brutal, they are exposed to the enervating influence of many idle hours. If you wish to demoralize a man, to dilute his manliness, corrode his patriotism, steal away his cheerfulness, destroy his enthusiasm, and impair his health, pen him up in an isolated camp with little to do, no books to read, no resource against idleness; if you wish to demoralize an army, march it off from a severely-contested battle-field into the woods, and condemn it to a month or two of listless do-nothingism. < I cannot let the mention of “base ball” pass without commenting that

this is Abner Doubleday’s staffer writing; and we should note that he did not say something like “that wonderful new sport of base ball that our general invented back in New York State!” And of course, that is because Doubleday did not have anything to do with it. My summary statement on the matter has always been to say that Doubleday was more of a boy scout than a little leaguer, and baseball was more about evolution over time than the creation of any one person at any one time. >

Every day now witnessed about our headquarters a levee of officers from the different brigades, and there was always straying in, to take a seat at our mess-table or sit around the evening camp-fire, some good fellow with a fresh atmosphere of thought and experience, to keep the social currents ever in motion, and prevent any mental stagnation. This evening camp-fire, built every night in front of the general’s tent, had become our usual place of assemblage after supper, and here any man who could talk was especially welcome; then were our old stories brought out once more, refurbished and newly decorated, as fair barter for his novelties; the old battle-scenes were re-enacted; fresh bits of humor sparkled around the circle, struck out, like fire from flint, by the concussion of wit and fancy. Our general, < this is the way Noyes always wrote about Doubleday > from his extensive repertoire of Mexican and Florida experiences, his personal acquaintance at West Point and elsewhere with most of the leaders in the rebel army, and his budget of entertaining anecdote, led the campfire congress, delighting us constantly with something fresh and new.  < Having read extensive amounts of material by Doubleday and about him, this last sentence really does capture the character of the man. He loved stories and recounting them over and over. Of course, many of them were filled with opinions and attitudes – leading either to extra enjoyment or extra contempt, depending upon the viewpoint of the observer. Among stories that Doubleday had written included being sold a defective horse by Stonewall Jackson and a host of others about the antics of John Magruder. I can certainly imagine this scene that Noyes describes. >