I again continue with this post by sharing some more of the writing of George F. Noyes – a lawyer from Maine who was a part of Abner Doubleday’s staff – and who wrote the following excerpt in his 1863 book The Bivouac and the Battlefield.

As throughout this series, the excerpt will be given in italics, whereas my remarks will be contained <in this fashion>.

Our next day was a quiet one. At our mess-table in the morning it was generally thought that we might move before night, and every moment was therefore occupied in bringing up arrears of staff business. <This is now several days after the battle. I would take from the total description of his writings at this point that they are camped to the west edge of the battlefield – perhaps on the Nicodemus farm, or somewhere roughly to the west of the modern Route 65 bypass.> 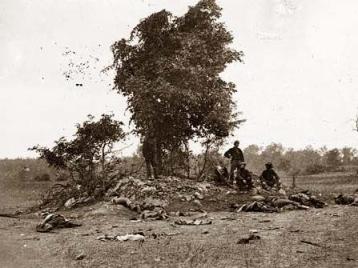 Late in the afternoon, however, I rode out to visit a portion of the battlefield I had not yet seen, once more to have a partial return of yesterday’s impressions. The van of that immense army of visitors, which for several weeks came pouring in to visit Antietam, had already arrived, and many citizens were now picking up relics of the battle, and exploring every part of the field.  Hither came the father or the brother from New England searching for his dead; here, also, the distracted wife sought out the grave of her heroic husband. The Hagerstown turnpike for weeks saw every afternoon almost one continuous funeral procession, bearing away to the North the bruised bodies of the North’s bravest sons. More than a thousand, perhaps, were thus carried home to sleep among their kindred, to repose beneath commemorative stones, to which all of their name and family shall point hereafter with natural and patriotic pride. At first it had seemed to me better to permit our brave boys to rest undisturbed under the bullet-scarred trees, in the little glens, or out in the fields, where they died for the good cause, and where they had been laid to rest by their comrades; but when I saw the gratification with which their graves were discovered by relatives who had come hundreds of miles to claim their own, and the affectionate tenderness, not unmixed with pride, with which they lifted the beloved forms, shrouded only in uniforms of blue, into their coffins, and the evident relief with which they commenced their journey home, I had reason to change my mind.  < From time to time I refer readers and guests to my friend John Banks’ Civil War Blog. Here you may read story after story of Connecticut soldiers who fought and died at Antitetam, along with the frequent accounts of their being brought home to a final resting place. As a recent example of this, check out his blog entry from 9/22/12 which may be found HERE. >

Stretching in front of the fields adjoining our camping-ground was one of the long fence-rail barricades of the enemy, and behind it a continuous pile of straw indicated their sleeping-spot at night. They had left behind them some fifteen thousand muskets, and details of men were engaged in collecting them. The burial-parties were still busily engaged; it seemed, indeed, that their sad work was hardly half accomplished. As we rode on, we met a friend guiding a couple of ambulances; as he was not a surgeon, we inquired his destination, when he told us that during his afternoon ride he had discovered, in a barn on the edge of the battlefield, some twenty rebels so desperately wounded that they had been unable to help themselves, and had therefore remained untended and without food ever since the battle. He was now going with the ambulances to bring the poor fellows into one of our hospitals.