This is the eighth in a series of blog posts past and future that relate the words of various writers about their experiences in the weeks after the Battle of Antietam. Today I return again to George F. Noyes’ remarks from his 1863 book “The Bivouac and the Battlefield.”  A part of Doubleday’s staff, he was quite an accomplished writer and likely a fine orator as well – in an age that especially honored men who could craft words in a moving and compelling fashion.

Noyes continues with descriptions of the scenes during the six to seven week stay in the area after the battle:  During all these weeks I never wandered over the battlefield without meeting parties of visitors, men, women, and children, come to seek out its most famous spots, to glean every little relic, to cut the buried bullets out of the trees, to picnic somewhere under the pleasant shade, and then to drive home with their curiosity fully gratified. 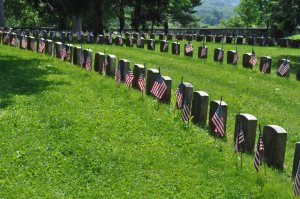 If time permits when hosting a tour at Antietam, I attempt to finish the experience with a walk through the National Cemetery – to view the south end of the field from that high vantage point, to see the line of six World War One African-American soldiers’ graves shoved off to the back corner of the cemetery … and then, while moving toward the grave of Patrick Roy (killed on the USS Cole) I read the following excerpt of Noyes:

One thing quite impressed me, and that was the rapidity with which the more marked traces of the battle disappeared. The roar of the last cannon had not ceased to reverberate among her leafy aisles before Nature, silent but ever active, had commenced to purify herself from the soil and stain of battle, and cover up the bloody footprints of War.  In two weeks’ time, only the broken-down fences, the shattered and ruined buildings, the torn-up cornfields, and the frequent clusters of graves reminded the traveler of the late struggle. A year or two, and even these evidences will disappear. These bullet-marks in the trees will be overgrown with fresh bark, fences, and fields, and farmhouses will resume their wonted appearance, and over the graves and trenches, where lie the buried thousands, will once more wave a thick green mantle of bearded grain. Would that thus might disappear from every Northern and Southern home the sad memories of this battle; that Time the Comforter might thus heal the wounded hearts and dry up the bitter tears in every Northern and Southern family! Would that thus speedily every reminder of this rebellion might disappear from the national memory, every rankle from the national consciousness; that our present national wound might be healed to the central point of difficulty, never to break forth afresh, and leaving no ineffaceable scar!

And my final point to be made to visitors is to say that, though we might appreciate the contemporary words of Noyes who writes during the height of the Civil War, and though we might also be sympathetic to his view that it would be best for this scourge of war to be ever forgotten, the fact is that it should not be forgotten! It should be remembered, and those who fought honored for their sacrifices. It should be preserved for all our posterity to come with generations of our families to reflect upon these Americans who gave the last full measure for those principles that inform our culture and mutual heritage. This is why we must preserve such a national treasure as is this battlefield: Antietam.