The 53rd Virginia of Pickett’s Charge

In the early Spring of this year I was driving through south-central Virginia on Route 29 and saw a sign speaking of visiting “historic Chatham,” so I exited the highway and drove into town to see what was historic about it. A town web site says: “Chatham was established as a town in 1777 during the turbulent years of the American Revolution. Chatham has been affectionately called the ‘Prettiest Little Town in Southside Virginia.’ It has also been called the hub of American architecture by some, as she boasts a fine representation of pre-Revolution, Federal, Victorian, and post-Victorian architecture.”  (I wrote another post on this town which may be seen on April 21 of this year in this blog.)

In the center of town is a monument (see pictures below) to the 53rd Virginia regiment – composed of men from this county of Pittsylvania. The 53d Virginia was the middle of five regiments in Armistead’s Brigade in the middle of Pickett’s Charge upon the Federal position at Gettysburg. Of course, this fatal attack was made on this date 149 years ago today. (I’m sure I’ll have more to say about this a year from today!)

Leading the charge of the 53rd VA was Lt. Col. Rawley W. Martin.  There is a home on the main street in Chatham with a historical marker speaking of this future physician in the town (see pictures below). 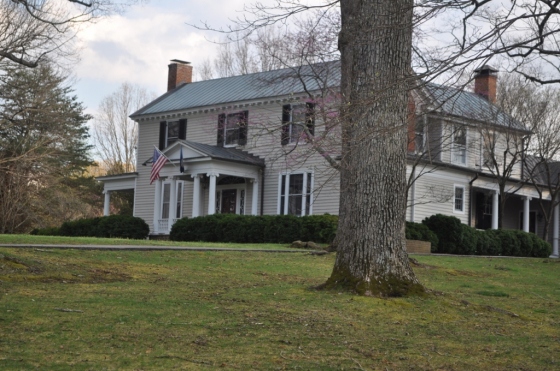