With the Antietam Battlefield Guides, we get to see all sorts of individuals, families, and groups. Earlier this year I wrote about a group of 300 Marines who were our guests to examine the battlefield and discuss leadership and tactics. We meet with educational groups, and especially this year there have been busloads of history teachers from public schools around the country – I’ve meet with two groups from Missouri and South Dakota. We connect with Civil War enthusiasts who are often quite well-read, along with every variety of family imaginable. 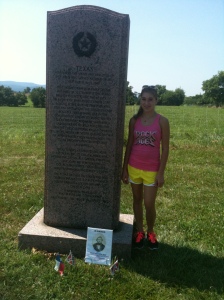 Today I met with a family from East Texas with a history loving, cheerleader, teenage daughter!!  So much for stereotypes. Dad was definitely a Civil War buff and his daughter was very interested in all aspects of the battle. Gotta love a girl like that (pictured at the Texas monument).

This past Saturday, I met with a rather young scholar on Clara Barton – a young lady from Frisco, Texas who will be going into 4th grade in September (she is no longer a 3rd-grader!). She wrote a school paper on Clara Barton, and her mom brought her (and her younger sister) to see the Antietam Battlefield and the very location where the future founder of the American Red Cross would become renowned for her work.

Clara Barton had a real heart for the suffering of the soldiers. She would load up extra medical supplies from wherever she could gather them and head out to the battlefield to assist wherever she would be welcomed. At first, she was seen as overstepping certain bounds of propriety, but she would eventually be known as “the angel of the battlefield.”

It was at Antietam that she told the story of a stray bullet passing through the sleeve of her dress into a wounded soldier whom she was assisting. She labored for six weeks with the army around Sharpsburg after the Battle of Antietam, came down with Typhoid Fever, recovered for a month in Washington, and resumed her efforts with the army by the Battle of Fredericksburg in December of 1862.

Beyond showing her the Poffenberger Farm, there was not much I could tell my young scholar friend that she did not know and have as a part of her report. I gave her a 10-page biography on Clara Barton copied from an online source, and she had it read before we even got to the Burnside Bridge!

I have met some pretty amazing children over the past 5-6 years!

Clara Barton scholar in front of the monument of her heroine!

Here is a Clara Barton quote that I share with most visitors who come to Antietam. At this point I have it pretty much memorized!

“If I were to speak of war it would not to show you the glories of conquering armies but of the mischief and misery they strew in their tracks; and how, while they marched on with tread of iron and plumes proudly tossing in the breeze, someone must follow closely in their steps, crouching to the earth, toiling in the rain and darkness, shelterless themselves, with no thought of pride or glory, fame or praise, or reward; hearts breaking with pity, faces bathed in tears and hands in blood. This is the side which history never shows.”