<The following three paragraphs are from my Doubleday research and book project … with other materials included below as well.>

Washington is where Doubleday was during the latter part of June of 1862, being called there on business about which he does not specify in his diary. But surely this business was connected to the creation of a new Union army—the Army of Virginia, which was birthed on June 26th. Bringing together the departments of Banks, Fremont, and McDowell, along with the troops in Washington under General Samuel Sturgis, this new force of up to 50,000 was placed under the command of Major General John Pope. Organized into three corps, McDowell was in charge of the 3rd Corps, which would include Doubleday’s Brigade.

Preparations for active campaigning now began in earnest for Doubleday and his command. During this period of approximately six weeks, Doubleday recorded a number of interesting incidents and details in his journal.

There was quite a grand celebration of Independence Day, and Doubleday recorded that Captain George Noyes, my brigade commissary, delivered a very eloquent address to the troops and we had a very pleasant celebration.1  The day consisted of an 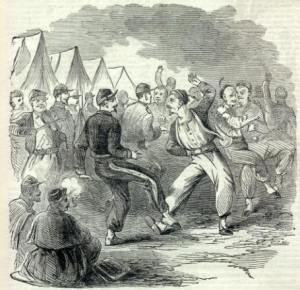 artillery salute, a reading of the Declaration of Independence to the gathered troops, accompanied by music from the band of the 56th Pennsylvania Volunteers. The afternoon involved great merriment of horse races between the various regiments, and the humor of races with donkeys. Regarding the speech of Noyes, the Maine lawyer wrote anonymously of his own oration: “Truly the penates [household gods – a word from Roman times] of the Phillips mansion, and the spirits of earth and air who, as the poets tell us, flit on invisible wings about these groves and hillsides, must have heard sentiments uttered on this occasion by the parlous Yankee orator which had for them at least, the charm of novelty. As for Virginians of mortal mould, we had but few of them, and these mainly contraband of war, who made up, however, for their lack of numbers by their open-mouthed enthusiasm. To them it was Independence Day indeed.”2  The historian of the 76th New York also wrote of the address as eloquent and patriotic, praising it for speaking openly of truths not usually heard in such a region oppressed by “the dark pall of slavery.” He reported that the address was heartily received by the volunteers who had come to suppress the rebellion, and rendered the opinion that they “consecrated themselves anew to their holy mission.”3

With the news of the change of base and Seven Days Battles being reported to the northern population, what were they to make of it?  Was this a victory or a defeat or something else? The mixed emotions may have been best expressed by a correspondent of “Vanity Fair” who wrote: Yes, my boy, we have had a great victory. Now we want to know who is to blame for it!4

The troops on both sides were being commended by their leadership. To the Army of the Potomac, McClellan wrote:  Your achievements of the past 10 days have illustrated the valor and endurance of the American soldier. Attacked by vastly superior forces, and without hope of reinforcements, you succeeded in changing your base of operations by a flank movement, always regarded as the most hazardous of military expedients … Your conduct ranks you among the celebrated armies of history.  No one will now question that each of you may say with pride, “I belonged to the Army of the Potomac.”

The Army of Northern Virginia was also receiving accolades from Jefferson Davis. Speaking anthropomorphically of the Union  Army, he wrote:  You marched to attack the enemy in his intrenchments with well-directed movements and death-defying valor; you charged upon him in his strong positions, drove him from field to field, over a distance of more than 35 miles, and despite his re-enforcements, compelled him to seek safety under cover of his gunboats, where he now lies cowering before the army so lately divided and threatened with entire subjugation.

If I could write half as well as any of these people in this blog post, I could make a living off it!  But hopefully I write more accurately and honestly and with some less hyperbole!!!  But it sure is fun to read!