On this date of April 28th, 1863, the Army of the Potomac was in motion to catch Lee with movements like unto a hammer pounding against an anvil. To understand this post today, if you are unfamiliar with these army movements, I would reference you to the remarks in this blog posted three days ago.

Let me begin today with some excerpts from Frederick Hitchcock’s War from the Inside – an account written of the activities of the 132nd Pennsylvania Regiment. As a part of the 2nd Corps of Darius Couch, they were moving to the west and crossing the Rappahannock at the U.S. Ford in order to join with the larger forces sweeping more widely to west.

Hitchcock wrote: On April 28 our corps broke camp and joined the column northward. The winter’s rest had brought some accessions to our ranks from the sick and wounded, though the severe picket duty and the excessively damp weather had given us a large sick list. We had, to start with, upward of three hundred and seventy-five men, to which was added some twenty-five or thirty from the sick list, who came up to us on the march. … We marched about six miles the first day, much of our route being through a wooded country, some of it so wet and spongy that corduroy roads had to be built for the wagons and artillery. The army can, as a rule, move as rapidly as it can move its artillery and supply trains, and no faster. Of course, for short distances and special expeditions, where circumstances require, both cavalry and infantry move very rapidly, ignoring the wagon trains and artillery; but on a general campaign this is impossible, and so where the ground is bad these must be helped along. In a wooded country the usual method is by corduroy road. Extra details are made to assist the pioneer corps, who cut down young saplings three to six inches in diameter and about six feet in length and lay them side by side on the ground, which is roughly leveled to receive them. They do not make a handsome road to speed over, but they bear up the artillery and army schooners, and that is all that is wanted of them.

The second day we crossed the Rappahannock at United States ford on a pontoon bridge. There had been a sharp skirmish here when the first troops crossed a couple of days before, and a battery of artillery was still in position guarding the crossing. We now began to experience once more the unmistakable symptoms of approaching battle, –sharp spurts of cannonading at irregular intervals some distance to the south and west of us, with the hurry of marching troops, ambulances and stretcher corps towards the front; more or less of army debris scattered about, and the nervous bustle everywhere apparent. We reached the famous Chancellorsville House shortly after midnight. This was an old-time hostelry, situated on what was called the Culpeper plank-road. It stood with two or three smaller houses in a cleared square space containing some twenty or thirty acres, in the midst of the densest forest of trees and undergrowth I ever saw.

Hitchcock goes on at this point to talk about some preliminary fighting that I believe would be associated with May 1st … which makes me think his earlier dating of his writing was off by a day … but nonetheless, he continues:

In view of the events of the next two days, it will be interesting to recall the somewhat windy order published to the army by General Hooker on the morning on the 1st of May … <written and dated the 30th>  … “It is with heartfelt satisfaction the commanding general announces to the army that the operations of the last three days have determined that our enemy must either ingloriously fly or come out from behind his defences and give us battle on our own ground, when certain destruction awaits him.”

My recollection recalls a phrase in this order reading something like this: “We have got the enemy where God Almighty can’t save him, and he must either ingloriously … etc…” I have been surprised not to find it in the records, and my memory is not alone in this respect … 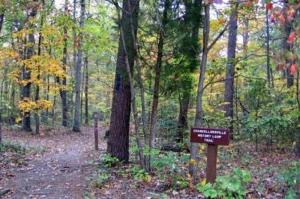 The purpose of this order was to encourage the men and inspire them with the enthusiasm of forthcoming victory. But when we consider that the portion of the army operating around Chancellorsville was at that very moment apparently as thoroughly caged up in a wilderness of almost impenetrable undergrowth, which made it impossible to move troops, and into which one could not see a dozen feet, as though they were actually behind iron bars, it will be seen how little ground there was for encouragement. I can think of no better comparison of the situation than to liken it o a fleet of ships enveloped in a dense fog endeavoring to operate against another having the advantage of the open.

This excerpt sets up the situation well for the opening of the Battle of Chancellorsville – to be continued in the next blog. It has been a number of years since I visited Chancellorsville, and not knowing I would someday write a blog, I did not take pictures. There is actually not a great deal to see, though the visitor’s center is very good. But my main memory is the sight of this dense vegetation, even to this day – an unbelievable tangle.