After a winter and spring of starring at each other across the Rappahannock River at Fredericksburg, the time had come for some real major action of the Army of the Potomac and the Army of Northern Virginia. General Hooker had devised a plan that, on paper, certainly appeared to be one of excellent construction. Even some of his doubters and critics found significant merit in it.

The Chancellorsville Campaign is rather complicated, but at the same time quite fascinating when studied in detail. In but a few posts, I will attempt to simplify it, while also bringing to it a few of the original sources I particularly enjoy.

The movements of the Army of the Potomac begin in earnest on the 27th of April. Actually, it was two weeks earlier on the 13th that Stoneman’s Cavalry was sent northwest to cross the Rappahannock and drive in Lee’s left flank toward Fredericksburg and ultimately a retreat toward Richmond. Running into terrible wet weather and flooded conditions, this vision would not be realized, though the cavalry would continue on to threaten and harass Confederate supply behind the lines.

Simply stated, Hooker’s plan to use his 130,000-man army to (#1) retain a visual presence (25,000 men) immediately opposite Fredericksburg at Falmouth, (#2) send 40,000 downstream to cross below the city to engage Lee’s right flank and hold the Confederates in that position, while (#3) the primary movement would quickly traverse some miles upstream with three corps of 42,000 – crossing the Rappahannock and Rapidan, driving east through the “wilderness” past Chancellorsville, thereby catching Lee in a vise grip between two major forces. Honestly, it is a good plan.

Making the long journey to the northwest (beginning on the 27th) were the 5th, 11th, and 12th corps of Meade, Howard, and Slocum respectively. The first two major fords to the west and northwest of Fredericksburg – well-defended by Confederates – would be skipped, as this force would march much farther upstream to cross at Kelly’s Ford. The 11th and 12th would make a wider sweep to the west and southwest, turning back toward the east by crossing the Rapidan at the Germanna Ford. The 5th Corps of Meade would turn more sharply against the Rappahannock, crossing the Rapidan at Ely’s Ford. The Confederates at the U.S. Ford would have to pull back to meet this threat, allowing an additional 10,000 troops of two divisions of Couch’s 2nd Corps to bolster the numbers of Federal forces moving from west to east toward Fredericksburg. The other division of the 2nd Corps and all of Sickles 3rd Corps would comprise the 25,000 at the center, while the operations to the east of Fredericksburg would be under the command of John Sedgwick – with his own 6th Corps and the 1st Corps of John Reynolds.

The key elements for success would be for the wide-ranging 52,000 men coming in from the west/northwest to successfully break through a 70-square-mile thicket of “wilderness” to the east of Chancellorsville, while also trusting that Lee would hold the bulk of his force at Fredericksburg. 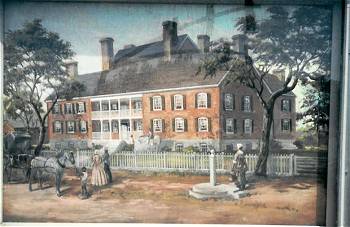 Sketch of the Chancellorsville House

The word “wilderness” is an apt description of the areas surrounding the Chancellorsville Mansion house and clearing, along with land to the west of it, including those areas south of the rivers in that direction. A dense thicket of scrubby wasteland, choking vines, blackjack and hickory … it was no place for a battle. Traversed by a couple of roads, an army would not want to be entrapped in such a place.

Lee again did what would not be expected. He possessed knowledge through JEB Stuart of the crossing of a large force to the northwest. One would expect that he would pull back toward Richmond and establish a new fortified position. Rather, he kept one-quarter of this forces under Jubal Early to meet the threat at Fredericksburg, while the rest would move west – establishing a line at Zoan Church in the open ground to the east of Chancellorsville and the wilderness region.

I will pick up the story in three days – talking about these troop movements leading up to the opening of battle on May 1st, using some interesting original source materials.