Running the Hills of Antietam

Yesterday morning I combined two of my favorite avocations – coaching distance running, and the Antietam Battlefield. I coach the boys and girls cross country teams at Williamsport High School. Currently, my boys team is among the best in Maryland. We were 2nd in the state last year and we only lost one runner to graduation.

The top boys call themselves “the D-crew” … which means “the distance crew.”  So I took five of them to Antietam to do some pre-season training. Locals sometimes run on the battlefield, and everyone around here knows how difficult that is. Though the northern part surrounding the cornfield is reasonably level, the south end of the field is extremely hilly.

The boys ran a total of 8.25 miles – charging up the hills like the 9th New York Hawkin’s Zouaves of Fairchild’s Brigade (although we’d never be caught dead wearing red – being a school of blue, black and white). 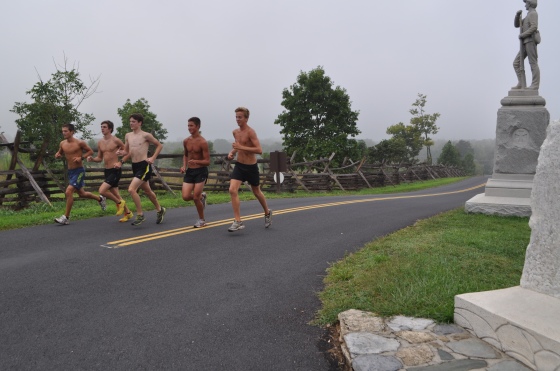 Posted by Randy Buchman on August 23, 2012 in Antietam / Battlefield Guides.