Marching Around Virginia in August 1862 – part 3

The following is from a draft of my long-planned and maybe never to be completed (??) book on Abner Doubleday. The text alternates between remarks from an obscure Doubleday journal and those of his adjutant George F. Noyes (who published a book in 1863 entitled “The Bivouac and the Battlefield”). After having his command stuck in Fredericksburg for many months, Doubleday’s men were now on the move at this time 150 years ago – taking them through Virginia to fight ultimately at Brawner’s Farm, Bull Run, South Mountain, and Antietam.

With the contending armies in a position to view one another across the Rappahannock River, and attempts at sustaining movements across the water exceedingly difficult, a significant artillery conflict ensued over a period of days. Doubleday’s Brigade acted in support of this action, which was the first live fire for most of his men. Noyes humorously wrote of this experience: “Our own infantry were at once ordered down to support the batteries, and be ready to oppose any attempt to force the passage of the river. As we moved across the plain, the shell bursting over our heads, and the shot screaming in our very ears, I cannot say that I enjoyed the situation. Now for the first time under fire, I had not become accustomed to the shrill whizzing music of the iron projectile. Had I been alone, I should probably have given my horse a chance to try his speed in the opposite direction; as it was, I had to ‘grin horridly a ghastly smile,’ and carry it bravely, as if charmed with these yelling messengers of war. I confess that I was not sorry when we reached the bluff, behind which we were comparatively safe, and could hear them shriek over us with entire equanimity.”

Observing this artillery dueling, Doubleday himself could not resist working personally with the big guns. On the 22nd, he wrote: “The cannonading was very lively, but the enemy not being able to force our men back, moved their batteries in the afternoon farther up the stream. My brigade was accordingly moved higher up and close to the bank of the river. There the artillery engagement was resumed. I personally took charge of the guns in my immediate front, and succeeded in demolishing one of the enemy’s limbers, and in doing other damage.”  Noyes was impressed by Doubleday’s interest in this duel and said, “Our general had not forgotten his military art, and occasionally lent his aid in sighting the guns or advising as to the length of fuse.”  A.P. Smith, of the 76th New York wrote extensively in regard to this incident: “General McDowell made his appearance about nine A.M., and ordered up fresh batteries, which being posted, General Doubleday, assisted by his gallant brother, Major Doubleday, took charge of two pieces, and did much damage to the enemy’s batteries on the opposite side of the river.” An officer of McDowell’s staff later rode up to find out who was manning the pieces doing such destruction, and when told it was General Doubleday, responded that such accounted for the close shooting. Smith wrote, “This spoken in the presence of the men, could not fail to fill them with admiration for their General . . .”  Smith continued his account with a paragraph of praise for Doubleday’s bravery, as an officer who was willing to risk personal exposure in a manner beyond his general observation of high ranking officers.

On this same day, Jeb Stuart was engaged in a cavalry raid behind Union lines, and captured Pope’s personal baggage, gaining much valuable information. Lee had this information in hand by the next day, the 23rd of August. He was now able to read reports Pope was sending to Halleck in Washington—detailing troop strength and locations. He also read of Fitz John Porter’s Fifth Corps having already arrived and in position opposite Lee’s right flank. Porter represented the first of McClellan’s troops arriving from the peninsula. Clearly, Lee needed to act. He was stalled against the Army of Virginia along the Rappahannock. There was no opportunity to flank Pope on the east, and efforts to flank him on the west had proven ineffective in recent days. There was a need for a bolder initiative. Lee determined to send Jackson on a wide flanking march through the Shenandoah, around the right flank of Pope’s army. Doubleday wrote in his journal of his admiration for Lee’s audacity in making this move: “Nothing could be more hazardous or opposed to military science than the proposed movement. To divide his army in two parts with Pope’s army between the wings was simply to run the risk of being beaten in detail. 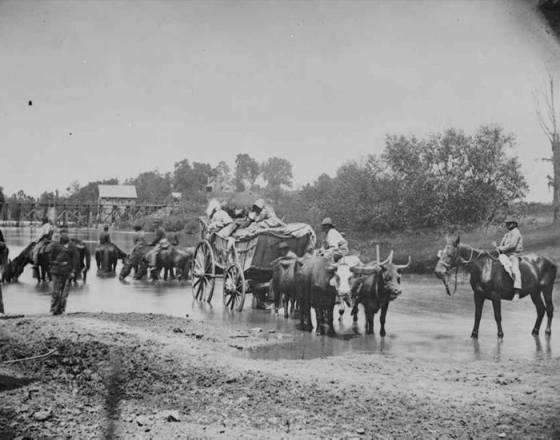