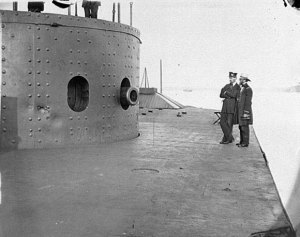 Deck of the Monitor

On the 8th of March of 1862 (150 years ago yesterday), the Confederate ironclad CSS Virginia had successfully assaulted a Union squadron at Hampton Roads, sinking the USS Cumberland and the USS Congress.

On this date, the Union Ironclad – the USS Monitor – arrives upon the scene and engages the Virginia. For several hours they circle and fire at each other with little damage inflicted. An attempt by the Monitor to ram the Virginia fails, and the Confederate vessel retreats to the Elizabeth River.

History is made; though both the English and French have been attempting to build such vessels, this is the first they are used in battle.

Innovations included (for the Monitor) not only the hull being completely under water, the gun turret also rotated a complete 360-degrees.