Remembering the Fallen: Normandy and Antietam

Getting a handle on the numbers of casualties at Antietam is difficult for anyone. The official number we go with is 23,110. While walking through the visitor’s center, I often hear people commenting on this number and speaking of it as 23,110 dead in one day. No, it represents those who were killed, wounded, and missing. The number who died is less certain, though my best understanding is that it is about 6,500 … and maybe about 4,500 on the day itself. 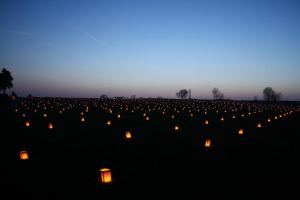 One would think that the numbers at Normandy in the June 6, 1944 D-Day invasion would be more certain in the more modern era. That is not actually true. Total losses there of the Allied Command are about 12,000, with 4,500 deaths.  So overall, we could maybe think of Antietam as twice the number of D-Day … but whatever, it is amazing. And to think of this carnage happening far out into the countryside from any major city!

Here is an illustration I use to help people get a handle on Antietam numbers. My word picture is to tell them to imagine a tour bus filled with people driving down the Sharpsburg Pike through the Battlefield. Suddenly, a deer runs across the road, and as the driver makes a move to miss hitting it, he loses control and the bus rolls over into a ditch. About 30% of the passengers are killed in the crash, while the other 70% are injured. If that were to happen today, in 10 minutes it would be reported as breaking news all over America on cable networks about a tragic bus crash in rural Maryland. And then I say, “Running the numbers, a tragedy of this scope happened at Antietam about every 90 seconds from sun up to sun down.” 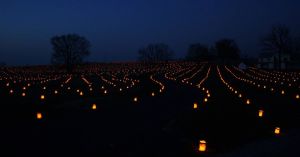 Tonight at Antietam, the Battlefield is covered with a surprise snow of about eight inches. Last night, it was covered with 23,110 luminaries for the annual Antietam Illumination. People line up for miles and for hours to follow the sobering five-mile ride through the Park. On a lesser year, like last night with the treat of impending foul weather the next day, about 10,000 people are a part of seeing it. Other years have seen as many as 20,000.

This September in Normandy a somewhat similar effort was undertaken on the beaches there to show the enormity of human loss. Forms were made to represent fallen soldiers by disturbing the sand, and the effect was stunning.  (pictures at the bottom)

It is appropriate to make such commemorations, as we reflect upon the values-driven bravery of those who have gone before us … even as we are the current-day custodians of these memories to pass down to those who follow. 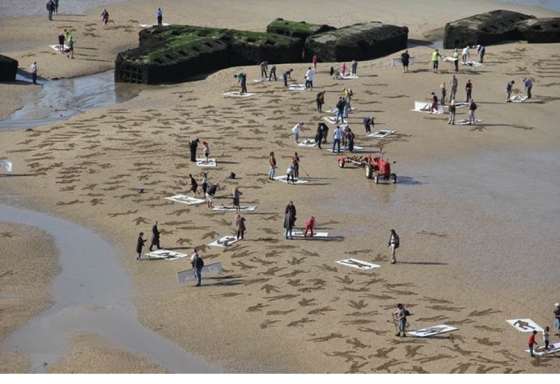 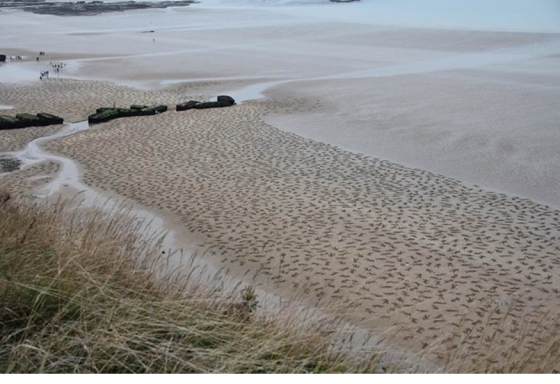