Gettysburg, Vicksburg, the Charleston Harbor, etc. – it was a terribly bloody month of July, 1863. With the “the Father of Waters flowing unvexed to the sea,” the mood in the North had risen, even as another round of depression returned to the South along with Lee’s battered army.

On the 29th of July, Queen Victoria spoke at the adjournment (until October 10th) of the British Parliament and said, “The civil war between the Northern and Southern States of the American Union still unfortunately continues, and is necessarily attended with much evil, not only to the contending parties, but also to nations which have taken no part in the conflict. Her Majesty, however, has seen no reason to depart from the strict neutrality which Her Majesty has observed from the beginning of the contest.”

A significant point to be made with guests at Antietam is that the Union victory – as marginal as it was, though occasioning the announcement of the Emancipation Proclamation five days later – mitigated against any European assistance to, or acquiescence to, the Confederate’s quest for independent recognition. Though England was disadvantaged by the loss of the cotton trade, neutrality was maintained.

Just this week at Antietam, I hosted a guest from Mancester, Engand who was immediately affirmative of this connection and significance.

Treatment of Black Soldiers by the South / Retaliation Order by Lincoln

With black soldiers now fighting for the Union in a variety of places – particularly with their extraordinary valor in July at Fort Wagner with the 54th Mass – the issue arose as to what sort of treatment these fellows would receive when captured or for whatever reason fell into the hands of the Rebels. Toward that concern, the following was drafted by the War Department and signed by Lincoln … and was issued by the Adjutant General’s Office on July 31, 1863, as General Orders No. 252.

It is the duty of every government to give protection to its citizens, of whatever class, color, or condition, and especially to those who are duly organized as soldiers in the public service. The law of nations and the usages and customs of war as carried on by civilized powers, permit no distinction as to color in the treatment of prisoners of war as public enemies. To sell or enslave any captured person, on account of his color, and for no offence against the laws of war, is a relapse into barbarism and a crime against the civilization of the age. The government of the United States will give the same protection to all its soldiers, and if the enemy shall sell or enslave anyone because of his color, the offense shall be punished by retaliation upon the enemy’s prisoners in our possession. It is therefore ordered that for every soldier of the United States killed in violation of the laws of war, a rebel soldier shall be executed; and for every one enslaved by the enemy or sold into slavery, a rebel soldier shall be placed at hard labor on the public works and continued at such labor until the other shall be released and receive the treatment due to a prisoner of war.

Back to Brandy Station! 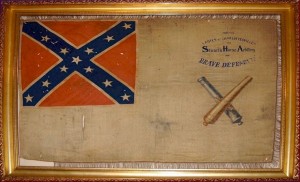 The actual, final end of the Gettysburg Campaign is marked by skirmishes on August 1st and 4th  at Brandy Station, VA (the site of the huge cavalry battle in June), as the armies again settled in along familiar lines at the Rappahannock River. Union cavalry forces under John Buford crossed the river and engaged Stuart’s men on a very hot day (August 4th).  Battling at this time as part of Stuart’s Horse Artillery was Mooreman’s Lynchburg Battery … who wrote thus of the skirmish, “I had the hottest arty fight I have had for some time. The Yankees had a four gun battery playing on my one gun (Napoleon) and literally ploughed up the ground around my piece – every man at the gun was struck and three of them badly wounded – still we held our ground until a shell struck the wheel of the carriage, disabling the piece entirely – we then had to withdraw.”