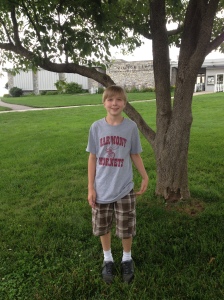 Two different groups of people at Antietam this past week have reminded me of my earlier visits to the Battlefield before I moved to this area in 1994.

The Boy from Harmony – I grew up in a rural farm country community in northwest New Jersey called “Harmony Township.”   While a 7th grade student at Harmony Elementary School, my history teacher gave an assignment to select a battle of the Civil War and write a report about it. Since I had an older married sister living in Ellicott City, anything to do with Maryland was very, very cool to me … and “Antietam” sounded like a really cool name. So I chose this battle and enjoyed the assignment.

Soon after that, when visiting with my parents at my sister’s home, I talked my father and brother-in-law into driving me from Howard County out to this remote Western Maryland place called Sharpsburg. This was before Interstate 70 was built. It was a long ride up and down hills; the day was damp and dreary; but I was in my total element at Antietam … I loved it! My father thought I was nuts!

Last week I met up with a grandmother who was bringing her 7th grade grandson to Antietam. He had expressed a big interest in Civil War history, and his grandmother (from Los Angeles) was going to fuel that flame. As he walks up to meet me, I notice he is wearing a shirt that says “Harmony Hornets” on it. No, he was not from New Jersey; rather, he attends a Harmony Middle School in Loudon County, Virginia. But it made me think of the boy in me that first came to this place 46 years ago.

The big family of little kids – Today as I was hosting a school group from St. Louis, I was engaged in conversation by a man at Bloody Lane. He had listened to some of my narrative and had a series of questions. I was not able to talk with him very long, but noted that he had his wife and young family with him – four girls, with the oldest being about age 7-8.

This reminded me of my second visit to Antietam when the fourth of my (then) four boys was just a baby (he will be a senior at UMD this year). Our oldest would have been age 8.  We had stayed in a motel the night before in Martinsburg, and the baby was rather sick and had made quite a mess of the hotel crib. We came to Antietam, and I was beginning the “tour” with the family – following the tour route – and before long we were at the Cornfield parking area. In the time it took for me to turn off the car and walk around to the other side and open the door, two more of the boys had gotten sick and thrown up. That was the end of the vacation trip, and we just went home to New Jersey as quickly as possible.

At neither occasion of visiting did I ever imagine a day would come when I would live in this area and have the opportunity to be a part of the educational/interpretive efforts at Antietam. But it has been an enriching experience, and I trust that on various occasions I’ve been able to pique some interest in some children and teens … that they will remember a fun time at Antietam and in subsequent years bring their families … and so on through the generations.