The Battle of Brandy Station – 150 Years Ago Today

The largest cavalry battle of the Civil War occurred in Virginia 150 years today – June 9, 1863 – with the Battle of Brandy Station, engaging roughly 10,000 combatants on each side.

The Confederate cavalry commanded by JEB Stuart consisted of five brigades under such notable leadership as Rooney Lee, Grumble Jones, Thomas Munford, and Wade Hampton. Two recent cavalry reviews had taken place: the first for the ladies, the press, and Stuart’s enjoyment, and the second involving Robert E. Lee on the 8th.

Lee’s plans for the cavalry were to cross the Rappahannock to the north to screen the recent movements of Ewell’s and Longstreet’s infantry, now marching to the west and north – ultimately to travel up the Shenandoah (meaning down the valley to the north).

But before Stuart could get started, Hooker sent Alfred Pleasonton and the Union cavalry on a movement to cross to the south of the Rappahannock, engaging the Confederate cavalry near Brandy Station in a preemptive raid in order to “disperse and destroy.”  The Yankee cavalry would cross at Beverly Ford two miles to the northeast , as well as six miles to the southeast at Kelly’s Ford.

General David Gregg’s wing of the Union cavalry crossed the Kelly Ford at a later time, joining the battle also at a later moment … but like Buford, catching the Confederates by surprise for the second time. Sweeping in from the east and southeast, the Federal Cavalry displayed their best day of the War so far with charges and counter-charges. Given the great surprise of it all, the Confederates managed to make a reasonable defense out of the situation.

After 10 hours, Pleasonton ordered a general retreat back to the north side of the Rappahannock, feeling he had accomplished his purposes. Actual Confederate losses were not terribly high, all things considered – in the 500s … with Union losses in the 900s (less than 100 killed). The greater loss for Stuart was in the Southern press, which was very hard on him and the entire cavalry for the surprise nature of the attack. This played out as a factor in Stuart’s motivations and decisions for the circuitous ride of the cavalry in the Gettysburg campaign.

For the Union, this was a day of arrival and maturity for the boys on horse. No more was heard the expression, “Who ever saw a dead cavalryman?” 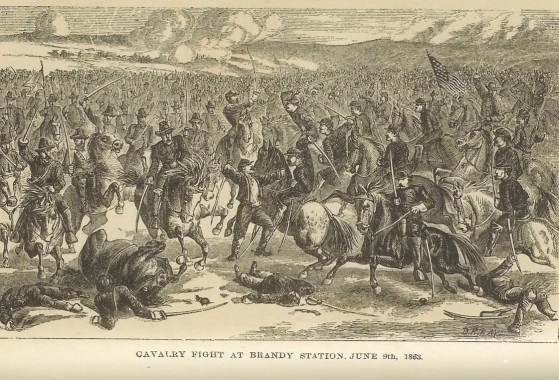