We are ALL Custodians

I had a terrifically fun morning today with a group of 4th grade students from Fountaindale Elementary School in Hagerstown, MD.  This was the second group of 4th graders from our home area of Washington County, Maryland that I have had in recent weeks. Apparently the teachers have done some curriculum revamping, and that certainly seems like a positive – as the kids are really engaged in the history and are well-informed with many basic facts and skills when they arrive.

Something that caught my ear today was the teacher telling me that there is a custodian at the school who is a Civil War enthusiast – apparently much involved as a re-enactor. He is a reference for the teachers and students on their studies in this realm. This took me back in my memory exactly 50 years to when I was an elementary student in Harmony Township, Warren County, NJ.  The school custodian was a man named Carl Morrison, and he was REALLY into the Civil War – having travelled many dozens of times particularly to Gettysburg. I guarantee you that every person that went to that elementary school would first think of this man when the subject of the Civil War is brought up – even all these decades later. He knew so much more about it than any of the teachers, that when the topic came up in history class, it was a foregone conclusion that Mr. Morrison would be summoned from whatever he was cleaning at the time to drop it all and come teach. He was very interesting, and I probably owe much of my original interest to this very, very kind man.

As a kid, every adult seems old to you. I remember him as a latter-middle-aged fellow. And now with the internet, one can research anything … so I found his death notice in the local NJ paper from 1990, where it said he was age 79 upon his passing. It also said simply this:  “He was a custodian for the Harmony Consolidated School for 20 years before retiring in 1976. He also lectured there on the Civil War.”  He sure did! So he would have been age 53 when I was the same age as the kids I saw today. And since I’m age 58, these kids probably looked at me as an old dried-up raisin ready for the grave! 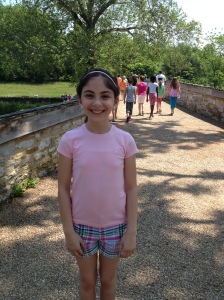 One of the little girls told me quite a story at the Burnside Bridge. She said something like, “Burnside’s first name was Ambrose, right?”  And she went on to say that he was an ancestor in her family … I got lost at about the 7th great-grandfather on one or the other side. But in any event, she was related to that handsome fellow of the 19th century. So I took her picture on the bridge named after her famous forefather.

I really do love kid groups, and I hope I can be a sort of “Mr. Morrison” character for them and plant a seed that might grow into something else. I know my old school janitor would love to see what I’m doing, and I’m sure he would have never missed anything I write were he to have been able to see it.

It would be accurate to say that we are all “custodians” – not in the janitorial sense, but in the preservation/generational sense – passing through for a time, with reflections upon those who went before, that those who come behind us may also be thankful for their sacrifices.