On this date of May 16 in 1863 was fought the Battle of Champion Hill (a.k.a. Baker’s Creek) – the name coming from a family who lived on the site. This was the primary battle of the Vicksburg Campaign and featured – in broad numbers – about 30,000 Union to 20,000 Confederate combatants. Pemberton had roughly twice that number in the larger vicinity at the onset of the campaign, but they were widely scattered and many cut off from connection due to the recent Battles of Raymond and Jackson. 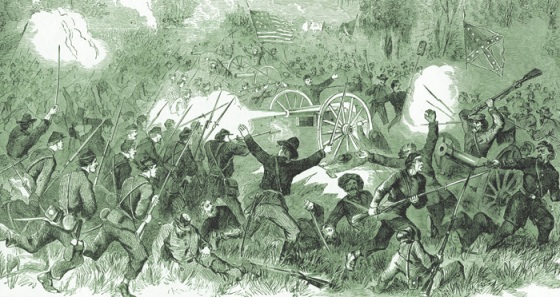 The battle began in the early morning along a 3-mile defensive front on the crest of a ridge overlooking Jackson Creek. Grant wrote of this, “Where Pemberton had chosen his position to receive us, whether taken by accident or design, was well selected. It is one of the highest points in that section, and commanded all the ground in the range.” McClernand was on the Federal left with McPherson on the right. Delayed in arriving at the center was Sherman in his march from Jackson, MS.  The left flank of the Confederate line was on Champion Hill where the most severe fighting was waged. Attacks and counter-attacks ended with the weight of the Union cause pushing the Confederates toward Vicksburg across the Big Black River Bridge – the theme for tomorrow.

A “champion” of the Champion Hill Battlefield site was the late Margie Bearss – wife of famed Park Service / Civil War historian Ed Bearrs.  She was the co-editor of My Dear Wife – Letters to Matilda: The Civil War letters of Sid and Matilda Champion.

Of the battlefield she wrote: “Years later, after I met and married Ed Bearss who at the time was the historian at the Vicksburg National Military Park, we visited Champion Hill where Ed was checking out the battlefield sites and drawing maps. The upper section of the crossroads had been opened and was passable from the site of the Champion house to the crossroads. I was amazed at how near the crest of Champion Hill was to the crossroads and to the upper section of the old Jackson Road. That stretch of road has now been closed for years. As Ed and I climbed the side of the hill, I began to feel uneasy and apprehensive. Too many men had died in the various charges on this hill. It was a solemn place of death. As I reached the top, my hair stood out from the back of my neck and my arms broke out in chill bumps. I could almost feel the menace of the Yankee charge breaking across the field. I have never since felt such unease and apprehension on the hill.”

A historian of the 30th Illinois regiment wrote, “There was not much time for burying the dead, and a good many of them was laid in a ditch and covered over. After the surrender of Vicksburg we were back over the battlefield and the rain had washed the dirt off and their knees were sticking out, and some of their teeth were shining.”  <from Granville B. McDonald of the 30th Illinois>

I noticed in my research that the great-grandson of Jefferson Davis will be the speaker this Saturday at the sesquicentennial celebration of the battle. To read about it, click HERE.