Confederate General Joseph Johnston – wounded at the Battle of Seven Pines in May, 1862 – arrived on the 13th in the state capital of Jackson, Mississippi. He was now commanding the Department of the West, having been ordered to Mississippi to address the growing threat in that region. He quickly surveyed the situation and seeing inadequate defenses and numbers of troops, he ordered the city evacuated. 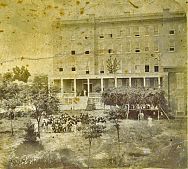 On the 14th, John Gregg’s men fought to delay the Union attacks of the 15th Corps of Sherman and the 17th Corps of James B. McPherson, and buy time for the city to be abandoned. The fighting began in late morning and intensified into the mid afternoon. The city having by this time been evacuated, Johnston ordered Gregg to break off the action and follow.

The Union occupied the town with Grant himself hosting a victory party at the Bowman house (hotel). Sherman was ordered to destroy railroad connections with Vicksburg and anything else in the city that could contribute to the war effort. This was done over the next two days. Properties were pillaged as well. Many of Jackson’s inhabitants also suffered the loss of personal property. A minister in the town remarked: “My thresholds, it is true, were spared the stain of blood; but theft and ravage, and wanton destruction marked every room in the house and every article on the premises. . . . May God forgive them for all the evil they did during the two memorable days which they spent amongst us.”

This Union victory not only brought down morale in the South, it isolated Pemberton’s troops in Vicksburg from reinforcement and supply.