On this date of April 7, 1963 President John F. Kennedy made a visit to tour the Antietam Battlefield. Arriving on a helicopter from Camp David, he was hosted by Acting Superintendent of the Antietam National Battlefield, Robert L. Lagemann. Also on the trip were Jacqueline and the Kennedy children, along with Senator Edward Kennedy and wife. 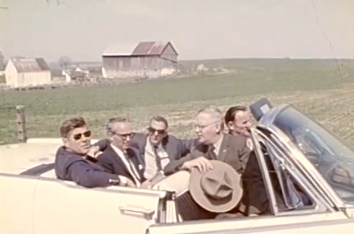 There is a public domain video that you may see by clicking HERE. It is about seven minutes long and is very interesting. It would appear that the weather on this date 50 years ago was every bit as fine as it has been today in 2013.

Among recognizable sites on the battlefield that the President is viewing includes the Poffenberger Farm at the north end of the North Woods (see picture of the barn in the background). Later, Kennedy is seen walking to and from the area of the New York State Monument near the visitor’s center. Especially interesting are views at the Burnside Bridge. At one point an automobile passes by, as the road was at that time still in common local use. Clearly seen as well are some of the four small monuments that originally graced the four corners of the bridge – these having been subsequently removed to the bank on the east side of the Antietam Creek. The witness tree is also evident in the background as the President walks out to the middle of the structure.

Over the years quite a number of Presidents have visited Antietam, beginning with Andrew Johnson and the dedication of the national cemetery. William McKinley – who was at the battle in 1862 – came in 1900 for the dedication of the Maryland State Monument, as did Teddy Roosevelt three years later for the New Jersey monument. The most recent was Jimmy Carter in 1978. An article that talks about each visit may be found HERE – written by current park ranger John Hoptak.

Posted by Randy Buchman on April 7, 2013 in Antietam / Battlefield Guides and tagged President Kennedy at Antietam.