Union General Caught in Bed (not what you think!)

It was 150 years ago on the overnight of March 8-9 that Union General E.H. Stoughton was captured by John Singleton Mosby – as the general was asleep! 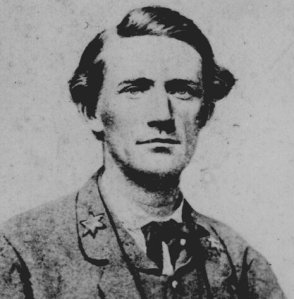 Confederate cavalryman John Mosby was known as the “Gray Ghost” for his successes with daring and flamboyant guerilla raids. He was a wanted man.

On this date, Mosby and his gang made a clandestine move behind Union lines at Fairfax County Courthouse, Virginia. Though surrounded by thousands of soldiers, they successfully made it even into the very bedroom of General Stoughton.

Two versions of the story (perhaps both true) say, first – that the general was awakened when Mosby pulled down the blankets and slapped his new captive on his bare butt, and secondly – that Mosby awakened Stoughton by asking, “General, did you ever hear of Mosby?” … to which the response was, “Yes, have you caught him?” The answer, “No, he has caught you!”

The Gray Ghost and his men (total of 30) were able to accomplish this raid without a shot being fired, taking with them 33 men and 58 horses. They alluded capture by moving stealthily through enemy lines. Quite an accomplishment!

Mosby was a colorful character. At age 28 when the War broke out, he had previously shot a fellow student at the University of Virginia. He read law while awaiting trial, for which he was exonerated and released. After the War he would make enemies in the South by supporting the Union efforts at Reconstruction.