Emancipation at 150: A Presentation at the Lincoln Cottage 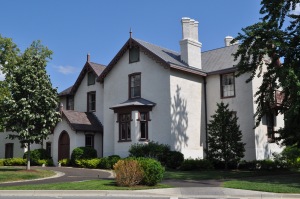 Yesterday I ventured into Washington to visit again at the Lincoln Summer Cottage, known to be the place that, in 1862, President Lincoln worked upon codifying and drafting his thoughts on the issue of emancipation. The cottage is a way cool site that every Civil War enthusiast needs to have on his short list of must-see places. To read about my summer visit there in 2011, click HERE.

In honor and commemoration of the 150th observance of the Emancipation Proclamation this past Tuesday, an anthology of essays entitled “The Emancipation Proclamation at 150,” was co-sponsored by the United States Commission on Civil Rights and President Lincoln’s Cottage. These essays by a dozen different scholars look at the Proclamation from a variety of historical contexts, noting also its evolution of meaning and significance over the 150 years. To download a free .pdf version of the anthology, click HERE.

Four of the twelve authors were invited for a two-hour panel discussion upon the topic. It was this event that I attended, especially interested in hearing Gettysburg College Lincoln scholar (and college classmate from the 1970s!) Allen Guelzo – who proved to be the most entertaining of the speakers. Also presenting were Spencer Crew from George Mason University, Lucas Morel of Washington and Lee University, and Obama Administration Ambassador-at-Large Luis CdeBaca.

Remarks by Allen Guelzo – here is a summary …

Guelzo opened by saying that a nagging question was why Lincoln issued the Emancipation Proclamation at all! Yes, there was pressure upon him by abolitionist folks, Frederick Douglas, Horace Greeley, etc.  But all of this did not really add up to that terribly much. There was little political benefit for Lincoln to proceed. Slavery was a part of all societies up to that point in some form or fashion, and though many Northerners did not like slavery as an institution, working to do something about it was beyond their interests. Guelzo pondered that if Lincoln had not taken the step of the Proclamation, would anyone blame him? So, with every reason not to do it, why did the President do it?

A second postulated question was this: Did it do any good? Guelzo spoke (and wrote in his essay) about the rather DULL and disappointing legalese text of the document – from a man who was a master of soaring and colorful rhetoric. After all, nobody memorizes the Emancipation Proclamation; everyone memorizes the Gettysburg Address. And then, as people read, you see the liberation extended “except” to certain locations … so it is LIMITED (more disappointment and speculation that his heart was not fully in it). Additionally, it is known that his RATIONALE involved military necessity – appearing that this was his mere reason for issuing it.

Yet Lincoln called it the great act of his presidency and of the 19th century! While it may be admitted that Lincoln was not the biggest advocate of black rights, he was a huge proponent of natural rights. Everything about slavery was abhorrent to Lincoln.

The problem for the President was one of jurisdiction. As Guelzo deadpanned, “He was only the President; slavery was an issue of state law … in the same way he could not have changed speed limits in a state (if they had such), he did not have jurisdiction over slave law.” Abraham Lincoln took a risk by stepping out on a narrow branch, walking a crooked path … using his only available authority – a war powers act. He had to be very careful (hence the tedious legal wording), knowing that Chief Justice Roger Taney would be waiting and willing to cut it to pieces.

Guelzo concluded with the final thought that Lincoln did it to fulfill a pledge to God – that if the Confederates where driven back across the Potomac, he would proceed with emancipation. And that is why this event connects so significantly to Antietam. As I often say to guests at the end of our time together – when coming to the point of revealing the battle consequence that on 9/22/1862, the preliminary emancipation was announced – “here now is the biggest idea of the day.”

My recent years of Civil War interest and involvement at Antietam of course have brought me across a great deal of literature about Lincoln. Everyone knows that he was in the first handful of our greatest Presidents and personages in American history. But I am struck over and over about the difficult balancing acts that Lincoln needed to carefully juggle every day – being pulled in disparate directions by the many irreconcilable factions around him.

So check out the anthology of essays – it is full of good stuff.