Christmas Day 1862 with the Army of the Potomac

I saw a holiday special TV program about Christmas traditions that spoke of how the most popular of all seasonal songs, “I’m Dreaming of a White Christmas,” became popular because of the millions of soldiers away from home in World War 2.  Indeed, it is a day that, as much as any, would cause someone far from home in the unpleasantness of a war environment, to ponder the sadness and distress of it all.

Here today is an interesting post from George Noyes’ War from the Inside. Again, it is so well-written that it is a simple mental picture to imagine the scenes penned by the junior officer. Beyond that, it is filled with several of my passions and opinions! It features a story of a footrace – and as a long-time runner and running coach, this tickles me! It is presented by Noyes in the illustrative style of a David and Goliath account.  And then the story of the day reports of the dissipation resultant from an overabundance of alcohol … well, that supports one of my lifetime contentions – that nothing really good comes from any of that “vile liquid.”

After this, little of note occurred in camp until Christmas. We had made ourselves as comfortable as we could with the materials at hand, which were not in super-abundance. The weather was what we were told was characteristic of Virginia winters … rather mild, slush and mud, with its raw, disagreeable dampness being the prevailing conditions. It was exceedingly trying to our men, and many, in consequence, were on the sick list.

My diary notes that on Christmas day we actually had a little sunshine, and that by way of adding good cheer to the occasion a ration of whiskey was issued to the men. The ration consisted of a gill for each man. Each company was marched to the commissary tent, and every man received his gill in his cup or drank it from the measure, as he preferred. Some of the men, who evidently were familiar with the intricacies of repeating in ward elections, managed in various ways to repeat their rations of this vile stuff until we had a good deal more than a gill of whiskey’s worth of hilarity in camp. However, the noise was winked at, believing it would soon subside and pass off. All drills were suspended and the men were allowed passes freely out of camp, being required to be in quarters promptly at taps. The officers passed the day visiting and exchanging the compliments of the season. The wish for a “Merry Christmas” was about all there was to make it such. I remember our bill of fare for Christmas dinner consisted of boiled rice and molasses, “Lobskous” and stewed dried apples. The etymology of the euphonious word “Lobskous” I am unable to give. The dish consisted of hardtack broken up and thoroughly soaked in water, then fried in pork fat. I trust my readers will preserve the recipe for a side dish next Christmas.

The day was not without its fun, however. Among other things, an impromptu foot-race was gotten up between the Fourth New York and our regiment. <The 4th NY fought at Antietam as the first wave of attack upon Bloody Lane – directly in front of the most sunken portion between the Roulette Farm Lane and the current tower.> The former regiment, with which we were now brigaded, was from New York City, and in its general make-up was decidedly “sporty.” They had in their ranks specimens of almost all kinds of sports, such as professional boxers, wrestlers, fencers, and runners. One of the latter had been practicing in the morning, and some of our boys had remarked that “he wasn’t much of a runner,” whereupon they were promptly challenged to produce a man who could beat him, for a cash prize of twenty dollars in gold. Win or lose, our fellows were not to be bluffed, and so promptly accepted the challenge. Back they came to camp with their “bluff,” to look up a man to meet this professional. So far as our men were concerned, it was another case of the Philistine defying the armies of Israel. Where was our David? All hands entered into the fun, from the colonel down. The race was to be a one-hundred-yard dash from a standing mark. We found our man in Corporal Riley Tanner, of Company I. <Civil War records show him listed rather as a private, single, and from a railroading background.>  He was a lithe, wiry fellow, a great favorite in his company, and in some trial sprints easily showed himself superior to all of the others. He, however, had never run a race, except in boys’ play, and was not up on the professional tactics of such a contest. It was decided that the affair should take place at five o’clock P.M., on our regimental front, and should decide the championship of the two regiments in this particular. The course was duly measured and staked off, and was lined on both sides by a solid wall of the men, nearly our whole division being present, including most of the officers. If the championship of the world had been at stake, there could hardly have been more excitement, so much zest did every one put into it. On the minute, the Goliath of the bloody Fourth appeared, clad in the most approved racing garb. He was a stockily built young Irishman, and looked decidedly formidable, especially when our poor little David appeared a moment later, with no other preparation than his coat and cap off and pants rolled up. Nevertheless, our boys thoroughly believed in him, and we all gave him a rousing cheer. The signal was given and away leaped our little champion like a frightened deer, literally running away from the professional from the start and beating him leisurely in the end by more than a dozen feet. Great was the furor which followed. The victor was carried on the shoulders of his comrades of Company I triumphantly back to his quarters, and afterwards through all the company streets, the victim of an immense popularity.

Corporal Tanner, scarcely beyond his teens, was a good, brave, and true young man, popular with his comrades and faithful in all his duties. Was this little race, so short and gloriously won, prophetic of his life’s brief course? He came home to survive but a few years, and then die of injuries received in the service. He was as much a sacrifice upon the altar of his country as if he had been killed in battle. He was long ago laid to rest in a soldier’s grave. But he still lives in the hearts of his comrades.

Well, to get back to Christmas. After the foot-race the men were given free rein until ten o’clock P.M., and passes out of camp were not required. As the evening wore on, it became evident that John Barleycorn had been getting in some extra work, from the character of the noise emanating from the company streets …

The account goes on to speak of fighting and conflicts that broke out that involved a complicated and difficult relationship between officers. I know I am sooooo very out of step with the bulk of people on the issue of alcohol. But as a student of history, it is not possible to read very deeply into any era of our country’s past without soon coming upon accounts of how an abuse of drink led to difficulties, problems, and even deaths. But, enough of that. If you’re reading this on the 25th, the best of holiday greetings to you. 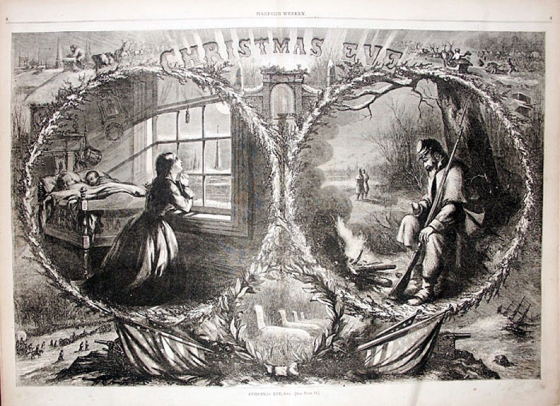 This is from Harper’s in January of 1863