Skirmishes large and small on September 15 and 16

This is the third of five posts from “Reminiscences of the Civil War: by Judge John W. Stevens, a Soldier in Hood’s Texas Brigade, Army of Northern Virginia.”  Stevens served in the 5th Texas Infantry. This segment will talk much about skirmishing action on September 16th – the eve of the great Battle of Antietam.

Most folks know that Antietam is considered the bloodiest single day in American history. However, I don’t believe many people realize how much skirmishing action took place the day and evening before the battle, as the contending armies took place on the field of conflict. This account is a riveting little story of one such encounter. As always when I do these sorts of posts, the italicized text is Stevens’ writing, whereas my remarks will be in regular type, enclosed within [brackets].

[Talking about the 15th] All day we were in line. The Federals pursue us and form their line on the north side of the river [actually meaning the east side of the Antietam]; both armies are now arranging for what promises to be another severe battle.

Our sharp-shooters are all along the river on the river bank, disputing every inch of ground. The rattling of musketry is at times very interesting, now and then the booming of artillery and the whizzing of shell remind us that the terrible conflict is coming. From some cause we have no rations; why? I cannot at this late date tell, but I know we had none. I remember breaking into a deserted dwelling, but found nothing but some pickles and apple butter. I thought the apple butter the best thing I ever tasted. About noon Gen. Lee had the news read to us that Jackson had just captured Harper’s ferry with 11,000 men, 20,000 stand of small arms and 70 pieces of artillery. We yelled, but still we were hungry; thus passed away the 15th. [Why did they have no food? Well, marching and fighting and marching and fighting… it was all too much to provision. It is interesting that Stevens writes about hearing the recent capture of Harpers Ferry. Indeed, it was but about 3-4 hours before he reports this news reaching the men. I have read of accounts of the contending sides being so close that when the Confederates cheered the news, the Federals were able to yell over and ask what the ruckus was about! But the good news of the fall of Harpers Ferry, received at the good ground for a battle on the west side of the Antietam, worked toward Lee making what he hoped would be a good decision – to make a stand on the ridge outside Sharpsburg, Maryland.]

[As a Greek linguistics scholar by training, this next paragraph is interesting to me – to see how Stevens vacillates between the present and past tenses. In Classical or Koine Greek, this is called an aoristic present… the idea being that the writer is talking of the past in such a vivid context that he slips into the present as if it was happening while being written.] Next day was merely a repetition of the 15th, except that each army had their lines more definitely formed and our friends in blue had effected a crossing of a good part of their army to the south side of the Antietam river. [Actually, it was only about 20%.]  There was more or less skirmishing all day the 16th. Jackson has been moving to join us ever since Harpers Ferry fell on the 15th. He reached us tonight, and all night he is engaged in forming his line. As dark on the 16th closes down upon us, the two lines where this writer was were about 400 yards apart. About 9 p.m. our regimental commander, Capt. Ike Turner, concluded that the enemy was trying to advance their lines under cover of darkness—starlight only. [Most veterans I’ve read who talk about the night before the battle talk about the rain – though maybe it started later than this time, or maybe it is yet another figure of speech.] This writer was detailed to call for one volunteer from each company, ten men, and to take them and go forward for the purpose of ascertaining the truth of this apprehension. Now, you must remember that was the first time since I left old Concord church, in Liberty County, that I had commanded anything except one gun. So, of course, for the time I felt that to some extent the success of the South rested upon my shoulders. So away we went, eleven of us, to feel for McClellan’s army. We felt of it, and it felt of us, too. We advanced carefully along for about 300 yards through some open woods—no underbrush—and the first thing we knew we were right up at the Yankee pickets. They thought we were their own men until we were right on them. Then the ball opened and I recall there was about the hottest fight of the war for about fifteen minutes, considering the number engaged. We all got mixed up until we hardly knew each other apart in the darkness. The blaze from their guns was blinding to us, yet we kept pegging away. This lasted I suppose for a full fifteen minutes, when all at once, as if by magic, the enemy ceased firing and vanished. Where they went to or what became of them we could not tell, only they were gone except about half a dozen dead ones, and we had lost five of our boys, all killed. In the melee we lost our bearings; as we were consulting about this, our commander sent for us to return. When we got back he complimented us for what we had done and said we had fully accomplished his purpose in sending us out. [This firefight would have been in the East Woods – the same place the 5th would fight the next day.]

About 10 o’clock that night we were relieved and ordered back about 600 yards to rest, and draw rations, which we did not get until about daylight next morning, and then too late to get the benefit of them, as you will understand we were ordered into battle before sunrise on the 17th, the hungriest set of rebels that ever fought a battle.

Referring to the little fight above mentioned, I can only recall the names now of two of the men who were with me: Hardy Allen, of Co. “E,” and House, of Co. “H.”

Allen was killed dead—shot through the breast. He was standing close to my side. I heard the death missile as it hit him, making a sound as though he had slapped his hands together. House was killed in a moment after just to my right.

Such a fight as that during the Spanish-American war would have filled the columns of the daily papers for two or three weeks, and every survivor would have been dubbed a hero, and possibly promoted. And yet I doubt if half the men in our regiment knew anything of it, and nobody thought of it 24 hours. 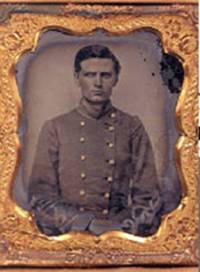 [Concerning this fight, the report of Captain Turner – written a week after the battle – says that “Late in the evening of the 16th instant our brigade was moved by the left flank from the position we had been occupying during the day to a field in front of a church. We had not occupied our new position long before a brisk fire commenced between our skirmishers and those of the enemy. The Fifth Texas Regiment was ordered to the edge of the [East?] woods as a support for our skirmishers. On arriving at the position assigned our skirmishers, being hard pressed, fell back and passed to my right. I ordered the regiment to commence firing, which checked the advance of the enemy.”]

Isaac Newton Moreland Turner is an interesting character. From a plantation background in Georgia and Texas, and only age 22 at the time of Antietam, he was a dashing leader with a bit of a flair for being a dare-devil. He was mortally wounded in April of 1863 and expressed at the end his desire to be taken back to Texas. However, it was only possible to get him back to the old plantation in Georgia to be buried. In 1994, a Confederate Sons group made possible the dying wish for his remains to return to the homestead in Texas.