The Inn – known as the Mountain House during the Civil War – is located on the National Turnpike where it traverses South Mountain at Turner’s Gap just above Boonsboro, MD. (You can link to the history of the Inn HERE.) This is one of the gaps where the Confederates sought to hold off the advance of the Union Army on Sunday, September 14th of 1862 – just three days before the Battle of Antietam. The Rebels were successful in holding the gap until darkness fell, but then retreated to the west through Boonsboro and ultimately over the Antietam Creek to the Sharpsburg Ridge.

In this blog I often include unpublished journal remarks of Abner Doubleday. He was a brigade commander under General Hooker during the Battle of South Mountain – fighting on the right of the Union line. This would position him to the north of the National Pike – ultimately at a higher mountain location from which a road would descend and empty onto the Pike at the location of the Mountain House.

Doubleday wrote in his journal entry as he began his September 15 remarks: “In the morning I assembled the division and went down to report to General Hooker. He was seated with Sumner on the porch of the tavern in the gap. Sumner told Hooker if he did not hurry up he would be ahead of him in the pursuit of the enemy. General McClellan was not aware that the enemy had gone until some time after daylight. I reported to Hooker the victory we had gained on the right of the road, and he was much pleased.”

It was too cold for us to meet on that porch this evening, but we did gather in the upper room of the old Inn – which is also located at the very spot where the Appalachian Trail crosses the Pike. This is the spot where tomorrow morning the most famous of ultra-marathons – the JFK 50 – will turn onto the Trail for a 16-mile segment taking the participants to the Potomac River near Harpers Ferry.

Park Superintendent Susan Trail spoke to the group, reflecting particularly on the recent 150th commemoration. She called it “the four most amazing days of my career.”  Today also marked her first anniversary at Antietam.

The Guides organization also recognized the three new guides who have joined the organization this year – having passed the grueling qualification process. 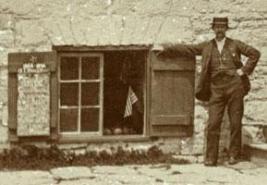 An award was given for the first time – the O.T. Reilly Award – which was given to John Schildt. Those familiar with the literature written on the Battle of Antietam know that quite a number of books have been penned by John. He has made a lifetime study of the battle, the battlefield, the participants, and the local population of the time. It is certainly appropriate that John would receive this upon his 50+ years of giving tours to varied groups. O.T. Reilly (1857-1944) was a lifelong Sharpsburg resident who began giving tours at age 15. He would often give up to seven tours a day! He personally met literally hundreds of the veterans, and O.T. was truly the first tour guide of Antietam.

The Guides have given about 800 tours this year.