This is the first of three consecutive posts on reactions within the Army of the Potomac on the dismissal of General McClellan. These are taken from some of the original sources that I enjoy referencing, as they are enjoyable to read and oft quick and willing to render opinions and evaluations of events around them. 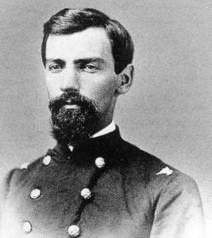 The first of three that I’ll share in this post is from Service with the 6th Wisconsin by Rufus Dawes. This great-grandson of the William Dawes of fame associated with Paul Revere, and father of a future Vice President (under Coolidge), would write this book in 1890. A Republican Congressman from Ohio, he fought as a major at Antietam in the famed Iron Brigade – writing colorfully of his experiences in the cornfield and along the Hagerstown Pike.

While we were in this camp, on November 7th, 1862, General George B. McClellan was relieved from the command of the Army of the Potomac by President Lincoln, and General Ambrose B. Burnside appointed to that ill-starred responsibility. There was considerable expression of feeling. No acts of insubordination occurred. There was talk of resignation by officers, but in our brigade, the sturdy faithfulness of Colonel Lysander Cutler, then commanding, and his known determination of character, had an excellent restraining influence. He declared that he would recommend for dismissal, for tendering a resignation in the presence of the enemy, any officer who offered to resign for such a reason. There were no resignations sent to his headquarters.

This second excerpt is from the “History of the Twenty-ninth Regiment of Massachusetts Volunteer Infantry : in the Late War of the Rebellion” by William H. Osborne (p. 201).

This regiment of old-line blue-blood aristocrats with some heritage even to the Mayflower were brigaded curiously with three New York Irish regiments as the famed Irish Brigade at Antietam. In spite of their glaring ethnic and cultural differences, they fought well together – though their time in the same brigade was to be short-lived. This historian in 1877 wrote:

The 7th of November also witnessed a change in the command of the Army of the Potomac, though this was not known to the troops until the 9th, when the fact was promulgated by general order. At this time the Army was massed in and near Warrenton; and here the farewell address of General McClellan, and the order of General Burnside, announcing his assumption of the command of the army, were read to each regiment.

Actually, this following paragraph preceded the one above, and demonstrates probably the greater feelings of sadness by the men on this date:

On this day, the news of the death of Major General Israel Richardson, who formerly commanded the division, reached the regiment. General Richardson died at the house of Mr. Pry, near the battlefield of Antietam, from the effects of the wound received in that battle, and his death cast a deep shadow of gloom over the entire army, and particularly over the Second Corps, in which he had long served, and in connection with which he had won a most enviable reputation as a brave and skillful soldier. The loss of such an officer as General Richardson was an event which might well have called forth a more universal expression of sorrow.

George Noyes only covers this dismissal in a sentence in The Bivouac and the Battlefield, which is curious given his strong feelings that I would have expected to make him critical of McClellan. But Noyes, whose duties involved supply, clearly he had bigger problems of his own to deal with at the moment … 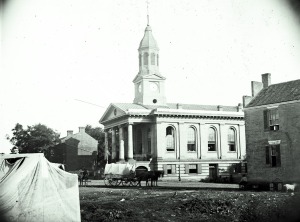 We remained in Warrenton four days, during which period General McClellan was relieved by General Burnside. Our staff tents were pitched around the school-house, which was still used as a mess-room; the weather was cold, and quite a heavy snow-storm gave notice of approaching winter. The first two days were to me full of anxiety, as there was no subsistence depot at Warrenton; the railway connection was not completed, and no one seemed to know positively where or when supplies could be obtained. I have before expressed my opinion as to the admirable organization and management of the commissary department; but when the railways are broken up, and other transportation is limited, it is a Herculean task to feed a large army. Some military authority has said, with laconic point, “An army moves on its belly;” and it was clear that unless food was procured our division would have to pause. And most of the other divisions were similarly situated. In the midst of a driving storm, I sent off a subordinate with a wagon-train a mile long, and with a sort of roving commission among the stations where supplies might be reasonably expected. Great was my relief when, late at night, after being two days out, he reported the train coming in with rations for our eight thousand men for nearly a week.