The Army of the Potomac Exits Maryland

< Noyes speaks frequently in the following segment about “our general” … and is of course talking about Doubleday. >

Tuesday, October 28th. A good sleep and a capital breakfast prepared us for our morning march. As we rode up and through Crampton’s Pass we enjoyed a fine sweep of landscape, and saw the town of Birketsville  < actually spelled Burkittsville > sitting up on its own little knoll, keeping watch and ward over the broad checkerboard of farms and orchards. The general was riding at some distance in front of the troops, and, having joined him, I was ordered to ride on to Berlin, <known since 1890 as Brunswick>  the little town on the Potomac which had been selected as the crossing-place of the army. My ride was, as usual, through a region crowded with troops; the turnpikes were now helped out by roads extemporized through the fields on both sides; mile upon mile stretched the great caravan, pressing slowly forward. It was evident that the Army of the Potomac was at last in motion. 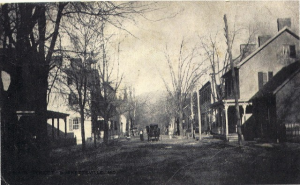 Berlin was a very interesting place to staff officers about this time, being situated on the railroad which brought up all the army supplies, but ordinarily it has few attractive features. For the next two or three days the village and the region about it became one vast military camp. General McClellan had already established his headquarters in a grove back of the town, and long wagon-trains were at once sent across the river over the pontoon bridge with subsistence stores, which they left in great stacks along the roadside, and then returned for more. Berlin was to be our only depot until we reached Warrenton, and every effort was necessary to provide against contingencies.

Having finished my business, I rode back, to find the division bivouacked about a mile out of town. The evening air was lit up with ten thousand campfires; and when tattoo was sounded by the bugles in every direction, we went to our beds, rejoicing in the belief that the Army of the Potomac was so soon to bid farewell to Maryland.

Thursday, October 30th. Yesterday was a very busy day for me, passed chiefly at Berlin; and to-day, at 1 P.M., we struck tents for the last time in Maryland, and the division moved at once into the town. But so many thousands were now pressing forward over the pontoon bridge that our march was delayed for an hour or two, and we sat with the general on our horses, amused by the evident exhilaration of the troops as they hurried by. The day was beautiful, and every one had quite a touch of the old enthusiasm. At last it was our turn to cross; the men who had been standing at ease along the streets and road fell in, the bands gave us their most exhilarating music, and at the head of his division of eight thousand men the general, with his staff, moved toward the pontoon bridge. All our tedious waiting at Antietam was forgotten; only the pleasant reminiscences of our Maryland campaign were left in our memory, and never have I felt more sanguine of success than on this lovely afternoon.

Just as we reached the bridge my hand was seized by a strong, two-handed grip, and, turning, I saw the pleasant face of one of our Fredericksburg friends, a good Union farmer of intelligence and thorough loyalty, who had been compelled to fly when our army relinquished that city. His “God bless you!” and fervent hope that we might free his state in this second trial, so that he might once more return home, greatly impressed me. I accepted it as a good omen to be thus cordially welcomed at the threshold of his state by a patriotic and warm-hearted Virginian. <Noyes served with Doubleday’s brigade in the spring of 1862 when it was stuck with McDowell’s troops in Fredericksburg for an extended time. Noyes was quick to make acquaintances with local folks wherever he went.>

While previously in Fredericksburg, Doubleday had caused quite a stir by allowing escaping slaves to pass through lines unhindered. He and staff officers hired some to go with the army and attend to various tasks. One can rightly imagine the fear in these folks at the prospect of retracing their steps to Virginia – the place of their slave confinement. Noyes writes of this:

During this day there was great excitement among our contrabands. The idea of going back to their former homes greatly disturbed them; nor could we blame them for desiring to keep out of the old net. Our cook had no wish to fry any more buckwheats for General Lee, his former master, and my own body-servant came to me with a look so piteous that I had not the heart to say him nay; so we paid them, and sent them back to Berlin rejoicing. Only two were now left of the old set who linked their fortunes with ours at Fredericksburg-Berryman, the old gray-headed darkey, whom I have seen so often sitting in the shadow of the general’s tent, teaching himself to read, the ugliest and apparently least serviceable of the whole party, whom the general took out of mere charity, but who gradually became useful, faithful, and wholly reliable, attending the general with the same solicitude felt by a good nurse for her little charge, and never known to be away from the headquarter wagons on a march; and Charles, a handsome, six-foot, finely-formed native of Maryland, who came nearer to Mrs. Stowe’s Uncle Tom in the simplicity, truthfulness, and deep religiousness of his nature than any I ever met with. The latter, now that my former servant had departed, became attached to the adjutant general and myself jointly, and the whole care of overseeing the pitching of my tent and furnishing it was safely entrusted to his hands.