Over a number of blog posts, I want to share with readers a series of descriptions of the scenes surrounding the Sharpsburg area in the days and weeks after the Battle of Antietam. Most of these will be through the eyes and pen of George F. Noyes – a lawyer from Maine who was a part of Abner Doubleday’s staff – and who wrote incredibly descriptive and moving prose in his 1863 book The Bivouac and the Battlefield.

This first excerpt describes the scene along the Hagerstown Turnpike in the area of the famous Miller Cornfield. His words will be in italics; my additional comments within <brackets like this>.  He wrote:

Let us first turn off to the left of the Hagerstown Turnpike; but we must ride very slowly and carefully, for lying all through this cornfield are the victims of the hardest contest of our division <speaking of Doubleday’s Division of Hookers 1st Army Corps>.  Can it be that these are the bodies of our late antagonists? Their faces are so absolutely black that I said to myself at first, this must have been a negro regiment. Their eyes are protruding from the sockets; their heads, hands, and limbs are swollen to twice their natural size. Ah! there is little left to awaken our sympathy, for all those vestiges of our common humanity which touch the sympathetic chord are now quite blotted out. These defaced and broken caskets, emptied of all that made them manlike, human, are repulsive merely. Naught remains but to lay them away quietly, where what is now repulsive shall be resolved into its original elements, shall be for a time “Brother to the insensate clod Which the rude swain turns with his share, And treads upon,” and shall reappear in new forms of life hereafter. <The quote is a poetic reference to the decomposition of death from an 1817 poem by William Cullen Bryant called “Thanatopsis”.  In researching the reference, I found it also quoted in a couple of regimental histories… must have been well-known.>  Passing through this cornfield, with the dead lying all through its aisles, out into an uncultivated field beyond <he is moving south through the cornfield, and now describing the scene where today would be the parking area along the park road called “Cornfield Avenue”>, I saw bodies, attired mainly in rebel gray, lying in ranks so regular, that Death the Reaper must have mowed them down in swaths <Hooker’s report stated a very similar observation: “the slain lay in rows precisely as they stood in their ranks a few moments before.”>. Our burying-parties were already busily engaged, and had put away to rest many of our own men 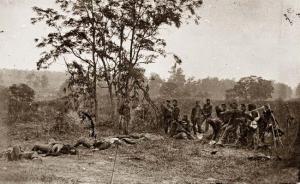 Dead being buried to the west of the cornfield at Antietam

<generally speaking, the home team guys got buried first>; still, here as everywhere, I saw them scattered over the fields. The ground was strewn with muskets, knapsacks, cartridge-boxes, and articles of clothing, with the carcasses of horses, and with thousands of shot and shell. <He next begins to describe the scene to the northwest and west of the cornfield.> And so it was on the other side of the turnpike, nay, in the turnpike itself; ride where we may, through cornfield, wood, or ravine, and our ride will be among the dead until the heart grows sick and faint with horror. Here, close to the road, were the haystacks near which our general <this is how he references Abner Doubleday throughout the book> and staff paused for a while when the division was farthest advanced, and here, at the corner of the barn, lay one of our men, killed by a shell, which had well-nigh proved fatal to them also. <I don’t know if this is the same shell, but Doubleday wrote in his report after the battle that, “A shell exploded under my horse’s nose in the beginning of this action on the 17th. This caused him to run over some steep, sharp rocks. He fell, and I was very much bruised and unable to hold the reins in my hands for a long time.”>

Keep checking back for more posts of this sort – detailing the time after Antietam – 150 years ago this season of the year.