The Bridge is THE BRIDGE

What more iconic image of the American Civil War is there than the Burnside Bridge at Antietam? The structure itself – nestled in a bucolic valley – traversing a gentle stream under the canopy of trees and hillsides … it just screams “Civil War History!”

Having taken hundreds of guests on tours of the scene of America’s bloodiest day, most often the highlight is the arrival at the hillside overlooking the bridge. As we park at the top of the hill where the Georgian Brigade held off thousands of Union troops on the opposing shore, people cannot help but verbalize their awe at the site of this compelling location with its poignant story.

It is so perfect; it is so enchanting, that people often ask, “Is that real? Was that bridge really here?”  People jump out of the car to take pictures – even people who took no photos at all up to that point will pull out their iPhone to get a shot of this object! 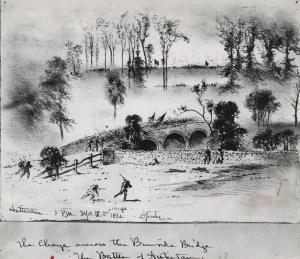 The bridge has captured varied artists of pen, brush, and shutter ever since that incredible day 150 years ago. An original sketch (pictured here) was made by Edwin Forbes – a landscape painter and etcher who gained fame during the American Civil War for his detailed and dramatic sketches of military subjects.

As I wrote in an earlier blog, on the day of the sesquicentennial, I drew an assignment to be at the bridge for the afternoon. While there, I was drawn to engage a young woman in conversation who was sketching the bridge from the opposite side as did Mr. Forbes 150 years earlier. I gave a business card with this blog address and email to her father standing nearby, and she recently sent me a note with her charcoal sketch of the bridge attached. I’m amazed that anyone can do anything like this! Her name is Katherine Bobby, and she attends Anne Arundel Community College where she is majoring in the Fine Arts. I think this is very cool …