150 Years Ago Today – The Battle of South Mountain

Again I’ve run out of time in this busiest season of my life to write as much as I’d like to, but I figure I have years of blog writing to pen all the thoughts and research details I might wish to include! I’m writing this here in the wee hours of the morning of the 14th, and I am looking forward to the late morning hours where I will be meeting with a small group to tour Antietam – though on this date I feel I will almost insist to these people that we need to drive over South Mountain. 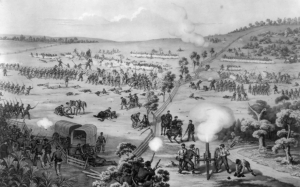 When I take people for a quick view of South Mountain (which is probably only on about maybe 1 out of every 25 tours I’d estimate), I take them to Boonsboro and turn south at the base of the mountain and travel several miles through Pleasant Valley. I then turn left to ascend the hill and cut to the east through Fox’s Gap – where the heaviest fighting occurred and where the Reno Monument stands. Then, going east toward Frederick where one can look into the Middle Valley and see the village of Middletown, I cut across a road to go the short distance north to the National Turnpike. A left turn onto Alternate 40 takes us back over the mountain through Turner’s Gap – following the assault of the Iron Brigade, past the Mountain House (now the South Mountain Inn) and down again to Boonsboro. While headed back to the Antietam Battlefield, I’ll take my guests through the winding main street of Keedysville, and ultimately back to the Battlefield by the country roads crossing the upper bridge used by the 1st and 12th Corps.

I’ll again, for this blog entry, talk just a bit about the Battle of South Mountain through the eyes and pen of Abner Doubleday. He and his brigade fought to the right flank of the action at Turner’s Gap, assaulting the Confederates on the mountain by moving parallel to the National Turnpike.

So here is Doubleday’s account from his journal. It is a bit long but is very interesting reading.

While Meade was assailing the Rebel right, and Reno the left, our division under Hatch attacked the center. Hatch directed Patrick’s Brigade to advance and develop the enemy’s line. For this purpose, two of the regiments were deployed as skirmishers—Colonel Rogers’ 21st NY on the right, and the 35th NY under Colonel. Lord on the left—with the remaining two regiments of the 20th NY (Colonel Gates) and the 23rd NY (Colonel Hoffman) as supports respectively. As soon as the Rebel position was ascertained, Phelps’ Brigade was ordered to charge them, and my brigade to act as a supporting force in reserve. Patrick went forward until he found the enemy in strong force lying behind a fence near the summit of the mountain—fronted by woods and backed by a cornfield full of low rocky ledges. Constituting a perfect natural fortification, Phelps’ Brigade charged the woods and General Hatch in person rode through the lines urging the men forward. They went in with a cheer, drove the enemy back into the cornfield after a sharp and severe struggle, and took possession of the boundary fence—which being on top of a low swell of ground, served as a slight breastwork and gave some protection to the men. Phelps held his ground for about half an hour, but he did so with some difficulty, as he was greatly outnumbered by D.H. Hill’s command with which he was contending, having been heavily reinforced by Longstreet.

When he could hold out no longer, I relieved him with my brigade, and he fell back to the stone church from which he had started. Immediately after this, I assumed command of the division, as I learned that General Hatch had been seriously wounded while leading a charge made by Phelps’ men. As Patrick’s Brigade was still deployed over a wide extent of country, and as Phelps had retired and Gibbon was detached, the fighting part of the division at this point merely amounted to my own little brigade of about 1,000 men. The enemy had from 4,000 to 5,000 in front of me under Longstreet in person, and these forces were securely sheltered behind the low rocky ledges referred to. Our lines were only 40 yards apart.

The enemy pressed heavily upon me, and there seemed no prospect of success in charging them across the open space through the corn, as they were superior in number and strongly posted. Finding they were reserving their fire and that most of our shot was wasted against an unseen foe behind the rocks, I ordered a temporary cessation of our fire. This induced them to suppose that we had given up the contest and were about to retire. They at once made a great charge upon our position, headed by Colonel  <???> of Virginia. It was now getting quite dark. As I was on horseback in the front line, I saw the charge coming before our men (who were lying down behind the fence) perceived it. I at once gave the command, in a loud tone, to commence firing. The troops sprang to their feet and poured in such a destructive volley that the charging line gave way and retreated, leaving a large number of dead and wounded behind them—some five or six yards in our front.

Their frontal attack having failed, a strong column was organized to assail my left flank. I had anticipated something of the kind, and had thrown out small outposts to give me due warning. At the same time as my ammunition was reduced to four or five rounds per man, I sent to request that General Ricketts, who was in reserve, would reinforce me. He came up promptly with Colonel Lyles’s Brigade and relieved my men. I would not consent however to leave the field, and directed my command to fall back eight or ten paces only behind Ricketts, in order that we might sustain him with the bayonet if necessary. A young officer acting as staff officer misunderstood my order, and directed the left of my line to join Phelps’ Brigade in rear at the stone church—at the foot of the mountain. The left referred to consisted of the 76th NY regiment under Colonel Wm. P. Wainwright and the 7th Indiana under Major Grover. They both filed off by the left flank in obedience to the last order. This movement brought their line perpendicular to that of the main body, and covered our left flank. Colonel Wainwright had gone but a short distance when he became satisfied that there was a movement in progress against my left flank. He took command of both regiments, halted them, and quietly awaited the enemy’s advance. The sound of the Rebels stumbling over the rocks in the dark now became plainly audible to him. He ordered perfect silence until they were very close upon him. He then poured in such a destructive volley at short range that they gave up the contest and fled from the field leaving their dead and wounded behind, and even abandoning their position opposite to us on the crest. It was no longer possible for them to hold it, for while the battle had been going on in our front, two regiments of Colonel Patrick’s command under Colonel Rogers of the 21st NY and Colonel Gates of the 20th NYS volunteers arrived and seized a fence which bounded the cornfield on the northeast. As this position flanked the enemy and endangered one of their batteries, they made a furious attempt to dislodge Rogers and Gates, but without success.

General Gibbon held an independent command on this occasion. He advanced up the national road towards Turner’s Gap, and pressed the enemy back on their main body. As they occupied a strong position behind a stone fence, and were in heavy force, he could not dislodge them.

We remained all night on the field of battle after sending the wounded to the rear.

At the very end of this journal entry about South Mountain, Doubleday recorded a number of miscellaneous stories from the event – which he simply entitled “South Mountain Anecdotes.”

Color Sergeant Charles E. Stamp of the 76th N.Y. moved out in advance of his regiment beyond the woods into the cornfield, and planting the staff in the ground he called out to the men, “come up to this.”  His position—being very much exposed and close on the enemy—he fell dead at once with a bullet through his forehead.

A soldier named Weaver came from Canada to enlist to defend the Union, out of sympathy for the Northern cause.  He fell in this battle mortally wounded, and gave his dying message to Captain Halstead of my staff.

A number of deserters from the enemy rushed over to join us during the firing, holding up their hands to prevent us from shooting them.  Several of them were unfortunately badly wounded.  They were Union men who had been drafted by the enemy and forced into the ranks.

The men of the 7th Indiana fought differently from the Eastern men.  Instead of loading and firing in silence, they constantly encouraged each other by calling out, “Give it to them, Issac” . . . “Stand up to them, Bill” . . . “ Don’t give way, John”, etc.

When it became evident that our shots were being wasted on the rocks while the Rebels were crouched down in safety saving their ammunition, orders were given to stop firing. One Western man who was fighting with great fury, with his hat off and long hair falling over his neck, could not be induced to stop for some time.  At last he called out angrily, “Who says stop firing?” “Gen. Doubleday says so, as says the staff officers.”  “Then let him make those big boys over there stop shooting at me . . . they began it!”