When speaking with guests at Antietam, I attempt to bring a balanced view toward the interpretation of events from 150 years ago. It is difficult to put ourselves accurately and fairly into the boots of the men who fought at this most incredible of days in American history. The factor that makes it so terribly difficult for us is that WE KNOW how it all turns out! We cannot escape that knowledge; and we need to restrain the consequent tendency to read into events a sense of inevitability that was not at all so very obvious and clear to them as it is to us.

Perhaps the individual most affected by this “push and pull” is General McClellan, and there is much effort in our day to cast him into a more fair light of understanding. I get that; I serve in leadership in everything I do in life, and I know that leaders are regularly discredited unfairly by people who do not and cannot understand all the factors that you know and must balance. Yet I also often feel the pendulum has now swung excessively toward a too gracious evaluation of a man who was both exceedingly gifted, yet exceedingly flawed. I often use the word picture of a football coach to describe McClellan: like my imaginary illustrative fellow who is good at organizing pre-season clinics, training programs, and weekly practices, but who – on the day of the game – has a lost look, is often at the concession stand instead of on the sideline, and who fails to show up in the locker room for half-time adjustments. This leaves subordinates to have to act independently in an oft uncoordinated effort.

It was on this day 150 years ago that General Lee’s Army of Northern Virginia departed Frederick to march in five different directions – particularly to deal with the problem of the large Union presence remaining in Harpers Ferry. And on this date, tens of thousands of the Army of the Potomac where marching west from Washington to deal with the threat of Lee’s invasion of Maryland. 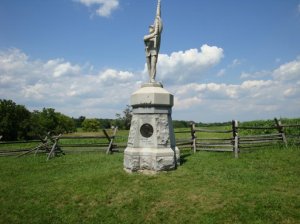 The following story would have happened about this time. It is from the Frederick Hitchcock book “War from the Inside.”  Hitchcock himself has a statuary presence that stands guard over Bloody Lane to this day … as he is the fellow with the flag on the 132nd Pennsylvania Monument (pictured). At Antietam, this was the first of their engagements, and Hitchcock writes very colorfully about his experiences before, during, and after the battle. They were totally new and raw at this point 150 years ago – so the westward march out of Washington and through Western Maryland was a first such experience for them as well.

Here is his account, and I’ll add – this is simply but another story of so, so many that, combined together, keep me from seeing McClellan in a totally new light relative to his historic evaluation. 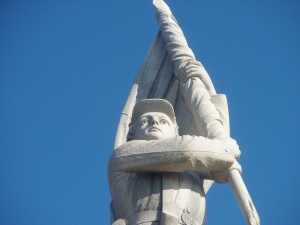 On our third day’s march we were halted for rest, when an orderly rode through the lines saying to the different colonesl, “General McClellan will pass this way in ten minutes.”  This meant that we were to be ready to cheer “Little Mac” when he came along, which, of course, we all did. He came, preceded by a squadron of cavalry and accompanied by a very large and brilliantly caparisoned staff, followed by more cavalry. He was dressed the full uniform of a major-general and rode a superb horse, upon which he sat faultlessly. He was certainly a fine-looking officer and a very striking figure. But whether all this “fuss and feathers” was designed to impress the men, or was a freak of personal vanity, it did not favorably impress our men. Many of the old vets, who had been with him on the Peninsula, and now greeted him again after his reinstatement, were very enthusiastic. But notwithstanding their demonstrations, they rather negatived their praises by the remark, “no fight today; Little Mac has gone to the front.”  “Look out for a fight when he goes to the rear.”  On the other hand, they said when “Old Man Sumner”—our corps commander—“goes to the front, look out for a fight.”