< The following is from my research for a book I continue to threaten to someday actually finish! It is from a period of time where Abner Doubleday’s command was still stuck in Fredericksburg, VA. >

Doubleday was clearly outraged that friends of the Union cause who lived in Fredericksburg were allowed by the Federal Army to be persecuted for their loyalty, and even be led away to prison in Richmond. Still early in the Civil War, Northern leaders were not entirely agreed upon as to the fashion of waging war in “enemy” territory that was, until recent events, considered a part of the United States. Hoping for a “limited war,” certain generals sought to not antagonize beyond absolute necessity.

During this season, McClellan was rendering unsolicited written opinions to Lincoln to not include the issue of slavery as a war aim. On the other hand, General Pope represented a more harsh opinion that Union armies should not feel at all hesitant about subsisting upon all resources available in a land in rebellion against the Government. Doubleday, given his strong abolitionist values and emotional indignation that the Rebellion must be expunged, naturally agreed with the harsher view of General Pope. The new leader of the Army of Virginia was rather bombastic and pompous in his aggressive remarks, which, when they found their way to Lee, caused the General of the Army of Northern Virginia to term Pope a “miscreant.”

Desiring to see justice accomplished for the suffering of certain families in Fredericksburg who had relatives taken from them, Doubleday records in his journal on July 23, “At my instigation, a deputation of Union citizens for Fredericksburg went to see General Pope to request that he would hold some of the most violent Rebels in Fredericksburg as hostages for the Union men who had been seized, had their hands tied behind their backs, and sent off on horseback as prisoners to Libby Prison in Richmond.”

An entry only one day later records the result of this action. “Mayor Slaughter and several other prominent Rebels are taken as hostages and sent to Fort McHenry in Baltimore.  This soon brought about the release of the Morrisons and the Union citizens. Before leaving Libby prison however, through a system of terrorism, several of these men were forced to take the oath of allegiance to the Confederacy.” 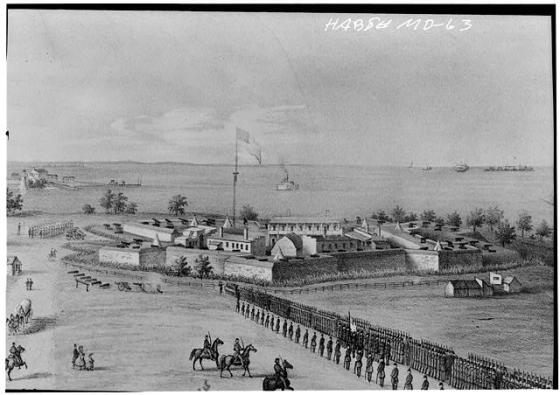 Depiction of Fort McHenry as a Civil War Prison Camp