Doubleday in Williamsport in 1861

<This post would have best fit into my ongoing Sesquicentennial Series a year ago – but I was not active with this blog at that time, so this is yet another in a series of “catch-up” postings until the first anniversary of this Enfilading Lines blog>

For those of you who are not local to my area and know me, I begin by reporting that I live near the town of Williamsport, Maryland on the Potomac River. As well, I’ve done extensive research on the life of Abner Doubleday – whose early ventures in the Civil War brought him geographically into the pathway of my life in Maryland. Here then is material that is mostly excerpted from my hopeful biographical book project someday… this information detailing activity in this Chambersburg to Williamsport to Martinsburg/Harpers Ferry area in June and July of 1861 …………….

The time in Chambersburg was brief, as on June 7th Doubleday’s command under George Thomas’ brigade led the march to the south toward the Mason-Dixon Line, and toward the Rebels occupying Harpers Ferry under the command of General Joseph Eggleston Johnston. This entire period throughout June of 1861 was one of organizational comings and goings. Companies would be promised or assigned to one command, only to be transferred soon after to another. Patterson’s orders from Washington were also confusing and indefinite, leaving him uncertain as to pursue the enemy and fight, or to maneuver against the Rebels in a more protective and cautious way. He was told to not risk his command, and he was, with good cause, skeptical as to how effectively his thousands of green recruits would perform in a battle against Johnston.  At Harpers Ferry, Johnston was aware of Patterson’s movements, as well as those of George McClellan to his west (who was successfully fighting against the Rebels in the mountains). Fearful of these Union forces combining and cutting him off from communications with Richmond and with the other major Confederate force to the east at Manassas, he chose to abandon Harpers Ferry and reform in a more defensible position at Winchester.  He commenced this movement on June 13th by burning the United States Armory buildings, by destroying all surplus stores, and by sending to Winchester all war material that could be made available.

By the 15th of June, Doubleday was in Williamsport, Maryland.  The two companies of infantry were detached from his command, but he retained the two artillery units. His orders were to secure (from New York) a number of heavy siege guns and fit them out for action. While awaiting the arrival of the guns in Hagerstown, a false alarm in Washington ordered all of Patterson’s Regulars to a defense of Washington under General Irwin McDowell. While going by rail, Doubleday’s command passed their heavy guns in Harrisburg on the evening of the 17th, and upon arrival in York at 2:00 a.m. on the 18th discovered by telegram the order had been countermanded (due to another rumor that Johnston was now about to attack Patterson’s depleted forces).  Returning to Hagerstown, Doubleday was ordered on the 19th to move his battery at once to Harpers Ferry. With harnesses not yet prepared to accomplish such a movement, this order was also countermanded. By the 22nd, Doubleday’s battery of two 8-inch iron howitzers and two iron 24-pounders moved to Williamsport and posted opposite the ford in the center of town. <a> 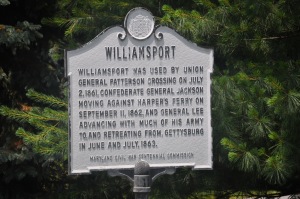 The town of Williamsport, in Washington County of Maryland, sits on the Potomac River at the point of its confluence with the Conococheague Creek.  Williamsport was a significant port of commerce on the Chesapeake and Ohio Canal, and the warehouse and boat docking area known as Cushwa Basin is preserved to this day, housing a canal museum.  It was also a location where the Potomac could be forded, as was done by Jackson’s command prior to Antietam (to capture Harpers Ferry) and by a substantial portion of the retreating Confederate Army in the week after Gettysburg.

A few hundred yards downriver from the Cushwa Basin is a hill—the highest point in Williamsport.  On this hill, Abner Doubleday placed his battery in a commanding position of the river ford and the Virginia side of the Potomac.  (The old town cemetery has grown at this location, but the earthen parapets for the battery may be seen to this day. A sign marks the location.) 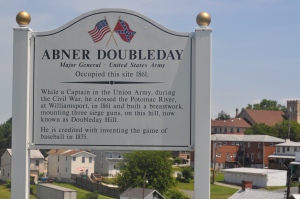 Perhaps it was this very location that a local resident visited in the summer of 1861. A Mrs. Angela Kirkham Davis lived in the nearby village of Funkstown, operating a Main Street general store with her husband. They were very pro-Union in sentiment, though surrounded by a great division of thought, with many, such as their closest friends, embracing the cause of the South.  In her writings, she portrayed Western Maryland in the summer of 1861 as “occupied, more or less, by United States troops under the command of Major General Patterson, afterwards, superseded by General Banks.” The soldiers were to be seen everyone and were customers of the store in search of “crackers and cheese, whiskey, and tobacco, cigars and letter paper.”<b> The couple frequently visited various encampments in the vicinity.

We visited Fort Sumter Garrison, which consisted of about 100 men and were introduced to Captain Doubleday, who was with General Anderson at the time Fort Sumter was besieged by the Rebels and was obliged to surrender. He was a fine, modest, unassuming young man. His tent was very pleasant, having flowers, books, etc.<c>

It was from this elevated position that Doubleday’s battery fired a number of rounds at the Rebels, as the Baltimore Sun newspaper on June 24, 1861 reported: “Confederate pickets exchanged shots across the river with Federal troops.  A battery of 24-pounders, armed by gunners who had been at Fort Sumter and commanded by Captain Abner Doubleday, drove them off after firing about eight rounds.”<d> Doubleday wrote of this incident: “I open fire upon a marauding party of the enemy’s cavalry (one company) opposite the ford and disperse them.  They leave their horses tied to the trees and had a force been sent over, we might have captured them.” <e>  A more colorful rendition of this event was told by a member of the 10th Pennsylvania regiment. This account reports Doubleday’s battery as placing a well-aimed shot of the 24-pounder onto the corner of stone structure occupied by Rebels about a mile into Virginia. A second shot from the howitzer scattered them completely and finally, all to the cheers of thousands of Union soldiers who witnessed it from the north side of the river. <f>

On July 2nd, Patterson moved the bulk of his force across the ford at Williamsport. Doubleday’s battery was left behind to guard the crossing in the event of a necessary retreat. An engagement occurred about five miles south of the river at a place called Falling Waters. Stonewall Jackson sought to slow the Federal advance, which he did for some time, but being outnumbered was compelled to fall back. Patterson occupied Martinsburg, while Johnston was 20 miles to the south in Winchester.  Doubleday joined the army on the Virginia side on the 3rd, but in another example of the right hand not knowing what the left hand was doing, he was ordered back to the ford without escort on the 6th.  This order of Patterson’s Adjutant General Fitz-John Porter was countermanded, and Doubleday made a return to Martinsburg the next day. Doubleday credited himself with saving his battery by acting so promptly to return, asserting that J.E.B. Stuart’s cavalry had plans to cut him off on the 8th. A Council of War on the 9th of July resulted in a decision to abandon any forward movement toward Winchester, but rather to fall back to Charlestown, near Harper’s Ferry, to be in a position to reinforce McDowell if necessary.

<f> from the web page http://www.pacivilwar.com/cwpa10history.html