On this Sunday, June 8th of 1862, Stonewall Jackson was enjoying the Christian Sabbath, but was nearly captured by Union cavalry in Port Republic, VA – the site of a conflict the next day. And about four miles to the northwest, a significant engagement erupted known as the Battle of Cross Keys.

After Jackson’s victories of 5/23 and 5/25 at Front Royal and Winchester, he withdrew his troops up the Shenandoah Valley (to the south) to remain in advance of converging Union forces. General Fremont’s troops moved toward Jackson from the northwest, while General Shields was advancing with significant numbers from the northeast. Jackson needed to prevent these forces from joining against him.

Halting the advance of Fremont from the northwest was the 5,000-man Confederate command of Richard Ewell. His main force was posted behind Mill Creek in an elevated position perfectly designed for such a defensive line. The 15th Alabama was sent ahead to slow the advance, but was easily pushed back. Fremont pounded the Confederate line with 40 artillery pieces for two hours and then sent forward on attack. Leading the way the 8th New York – a largely German regiment under Julius Stahel – who were slaughtered in a cross fire from Isaac Trimble’s Brigade which had taken concealed cover behind a rail fence.

The Union forces found little success at any point along the line and were called back from the attack. The Confederates had held off the command of Fremont from joining Shield’s troops – who would fight Jackson’s command the next day at Port Republic.

The area surrounding the Cross Keys battlefield is an exceptionally beautiful rolling countryside. Here are series of pictures with captioned remarks – all these taken last weekend.

Union artillery took position all along the plains seen in the background of this picture – taken from the western side of the battlefield – looking toward the northeast … The Massanutten ridge is seen on the horizon.

The death dates of these two Confederates from MD indicate that they fell in the rear-guard action on the 6th (see previous blog post) under Turner Ashby – where the 1st MD was considerably engaged. They were also in position on the extreme left of the defensive line at Cross Keys – which would be relatively near this church cemetery.

This angled road rose from the Mill Creek and is the path ascended by the 15th Alabama as they pulled back from their original advanced position to this main Confederate line. 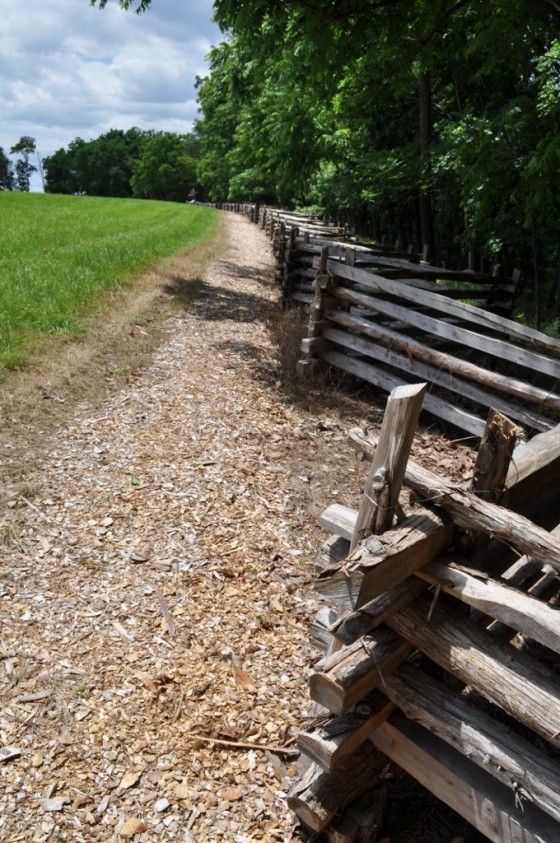 This is the Confederate line above Mill Creek – sadly the trees now prevent a full appreciation of the excellence and strength of this position.

The fields to the left-front would be those through which the 8th NY advanced.