Stuck in Fredericksburg – May 1862

<This material is from my research and writing on the life and Civil War adventures of Abner Doubleday.>

In the final week of May, 1862, Doubleday and the 76th N.Y. made the steamer passage down the Potomac to Aquia Creek, and camped there before embarking on the final 18-mile march to Fredericksburg. President Lincoln and Secretary Stanton had made an impromptu visit to meet with McDowell, arriving at Aquia Creek about the same time. The President and his party traveled to Fredericksburg in a mere boxcar, while Doubleday and his staff followed in a freight train.  McDowell was using the red brick mansion home of a famous Rebel named James Horace Lacy for his headquarters. The sight of President Lincoln gathered with a sizeable group of Generals made quite an impression upon both George F. Noyes (of Doubleday’s staff) and A.P. Smith, the historian of the 76th New York.  Noyes wrote: “It was to me very interesting to see these leaders, some of whom were already famous . . . Every face was full of hopeful anticipation; the President dispensed every where his dry hits of good logical common sense, wrapped up in the humorous coating of anecdote or illustration, and not a suspicion of the impending disappointment intruded itself; nor had I then a conception how much of envy and professional jealousy found lodgment beneath some of these uniforms. Artists, authors, and clergy men have perhaps been considered most liable to this weakness of jealousy, but, in this regard, professional soldiers may, as a class, be deemed their rivals …” <A>   Smith’s account is strikingly similar, noting that “confidence beamed on every countenance,” while also remarking upon Lincoln’s wit by reporting this council of leaders to oft be “enlivened by one of his dry jokes, or one of those never-failing ‘that reminds me of a story,’ with which he was wont to preface a happy illustration.” Most remarkable is the similar conclusion drawn by both writers regarding the unified appearance of this impressive array of powerful leaders, though learning before long of the seething jealousies hidden beneath this imposing exterior. Smith said, “Judging from the external appearance of that council, an inexperienced observer would have seen nothing tending to induce the belief that those very men . . . were inwardly rankling with jealousies, which, in three short months, would permit one portion of the army to be cut in pieces, while the other portion was within supporting distance, disengaged [speaking of Second Bull Run].” <B> 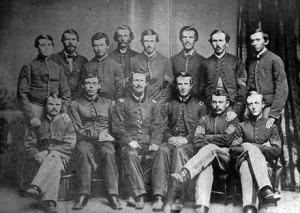 Various men of the 76th NY

Doubleday reported for his orders in the midst of this gathering of McDowell’s officers and the President. Lincoln had recently reconsidered on the issue of McDowell’s Corps being withheld from McClellan, and McDowell now possessed plans to join McClellan on the peninsula. Doubleday was informed that his regiment, not yet being fully composed, would stay behind, and that he would be in command of Fredericksburg and the surrounding country.  He would specifically be replacing General Marsena Patrick as the Military Governor of the town. Doubleday wrote of McDowell’s word to him regarding the manner of accomplishing this: “He informed me that his policy was to placate the Rebels as much as possible and keep them in good humor.”  <C>

Placating Rebels was not a skill for which Doubleday had any disposition, natural or otherwise. He was in trouble before long. His baggage was late in arriving, and since Patrick was not moving out of his residence for another day or two, Doubleday occupied the house belonging to a prominent Rebel who was in the Confederate Army at Richmond. “This, it seems, [Doubleday wrote in his journal] was contrary to the placating policy of the commanding general, and when he heard of the occupation, a day or two afterwards, he sent me a preemptory order to vacate the premises immediately.” <D> 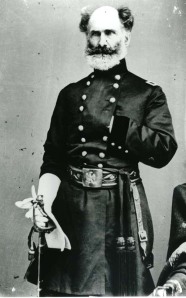 Doubleday was astonished at the policies in effect in Fredericksburg. Local residents demanded guards for everything “from a hencoop, cherry tree, or water closet up to a dwelling house, and they threatened in case these requests were not acceded to, to report me to General McDowell and have me relieved.” Additionally, Doubleday recorded in his journals that a Rebel major by the last name of Slaughter was empowered to govern as a mayor, and that he was in the habit of arresting Union men on the slightest pretext of violating some city ordinance and having their hands bound behind their backs while being sent away to Libby Prison in Richmond. It was Doubleday’s claim that McDowell was not sympathetic to the pleas of family members of those being thus detained, and that this policy was therefore tantamount to sanctioning the persecution of loyalists and natural allies. Doubleday was also shocked “at the violent tone assumed by the people of Fredericksburg …  as they had been allowed unbounded license of speech and they used it very freely.”  The citizens of the town also had the expectation of their Military Governor that he would prevent any escape of fugitive slaves and disallow such from crossing into the lines of the Federal Army. Doubleday wrote: “In this they were disappointed, and they complained bitterly to General McDowell … It soon became evident that I could not be relied upon to carry out any measures which, in my opinion, amounted to persecuting the loyalists, and I was glad to be relieved.” <E>  The task of Military Governor was transferred to General John Reynolds, who immediately discontinued all passes of Negroes who desired to cross the river.  Doubleday wrote that the net effect of this was “to greatly increase the wealth of the citizens of Fredericksburg in this kind of property,” as the town was full of fugitive slaves whose masters were in the Rebel Army. <F>

Not at all surprised by this “disaster” of having Abner Doubleday as Military Governor of Fredericksburg was the outgoing officer in that position, Marsena Patrick. Patrick was a conservative Democrat of deep Presbyterian religious convictions. A severe disciplinarian of his own troops, he became Provost Marshall General of the Army of the Potomac—an organization replete with troubled people. Patrick had deep sympathies for the peril of civilians caught in crossfire of war. He was far from a favorite of the Radical Republicans, who distrusted him as overly sympathetic to Southerners. In fact, after the War, he was removed from his position for displaying too much sympathy for ex-Confederates. <G>  Writing in his journal on May 23rd of 1862, he said: “Doubleday has arrived and made a fool of himself before he had been here an hour.  There is a feeling of sadness in the whole community, and I feel sad myself, at the thought that these helpless families are to be left to the tender mercies of an Abolitionist.” <H>

This disaffection for Abner Doubleday was not apparently shared by the troops of the 76th New York from Cortland County. In a collection of their letters, they make frequent warm references to their commanding general and native of their home state. A number of the letters mention the inclusion of such items as pictures of Doubleday, or a transcription of his words to them on a particular occasion.  <J>

Before McDowell could join McClellan for the planned attack upon Richmond, Stonewall Jackson became active once again in the Shenandoah against General Banks. Jackson’s activity was intended to cause the Administration in Washington to divert McDowell from reinforcing McClellan, and it accomplished exactly that. A substantial portion of McDowell’s forces (20,000 under Generals Ord and Shields), and eventually McDowell himself, went to chase Jackson around the Shenandoah. McCall’s Division of McDowell’s command did move on June 8th to join McClellan. The total effect of these various actions confined Doubleday’s Brigade to continued guard duty, affording Doubleday no opportunity for drilling his troops in preparation for active campaigning. He was again in charge of Fredericksburg, although he appointed Major Charles Livingstone of the 76th New York as the Military Governor of the city. About this time, two new units were added to Doubleday’s command: the 56th Pennsylvania Volunteers and the 95th New York Volunteers. These new regiments were assigned to duty in guarding the railroad and bridges to Aquia Creek, while the 76th New York continued guard duty in Fredericksburg. Again, Doubleday complained bitterly about the expectations of the citizenry and the resultant abuse of his men, writing that: “as our sentinels were grossly insulted on many occasions while on post by the Rebels and were not allowed to reply or leave their post, a very bitter feeling arose among the troops.”  <K>

The historian of the 76th New York described the mood of the local populace toward the Union occupation:  Fredericksburg was one hotbed of secession. The women, as they passed the “boys in blue,” drew their dresses closer about them, and not infrequently left the sidewalk, lest perchance they might be contaminated by a touch of the garments of their enemies. Did a flag wave from headquarters, fort, guardhouse, or sutler’s tent; the “chivalry” would cross the street to avoid the shadow of the banner of the invaders, and in all manner of ways, which could not and were not intended on the part of the secessionists to be mistaken by the Union men, did the inhabitants of this city show their disrespect and utter abhorrence of everything that favored the United States. This feeling was confined to no particular class, (if we except the colored race), but was shared by the merchant, mechanic, professional man; and reached the climax in the female population, who were frequently more forcible than elegant in their expressions regarding the hated “Yankees.”   <L>

C.  Doubleday Journal: My Record During the Rebellion, pp. 55-56