150 Years Ago Today – The Battle of Front Royal

On this date of May 23, 1862, Stonewall Jackson enhanced his already excellent resume with a powerful victory in his Valley Campaign, routing Union forces in The Battle of Front Royal.

The Union Army under General Banks had a garrison of over 1,000 men at Front Royal, Virginia. It was under the command of Colonel Kenly. A Confederate force of 3,000 of Jackson’s and Ewell’s Divisions, along with three cavalry regiments, outnumbered and outmaneuvered the Union detachment.

The surprised Union men were driven through town, attempted to burn bridges to disallow a Rebel pursuit, and made stands on two successive hills (Camp Hill and Guard Hill). However, they were outflanked and routed, with the bulk of the Union force surrendering while the Confederates suffered less than 50 casualties.

The result of the battle was to force Banks’ Army at Strasburg into a rapid retreat north toward Winchester – where the next battle of the Valley Campaign would transpire in two days. As well, the conflict ratcheted up the concerns in Washington for the safety of the Capital and led to a renewed call for more men to fight in the cause of the defense of the country.

Of special interest to Marylanders is the unique feature of this battle that pitted the 1st Maryland CSA against the 1st Maryland Regiment of the Federal army. In the course of the battle, Captain William Goldsborough of the CSA captured and took prisoner his own brother Charles Goldsborough.  Another Goldsborough, who chronicled the history of Marylanders in the CSA wrote that “nearly all recognized old friends and acquaintances, whom they greeted cordially, and divided with them the rations which had just changed hands.”  <Goldsborough, J. J., The Maryland Line in the Confederate Army, p. 58.> 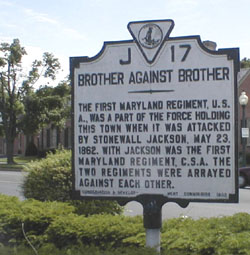 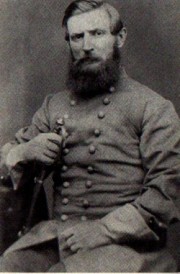 (To be as complete as possible, though I read the story of the Goldsborough brothers in several locations, here is a link to another story about them – Frederick County residents – and it does not mention Front Royal, but does mention two other occasions of their meeting in the War while contending for opposite sides.  (http://perspectives.jhu.edu/2011/05/national-strife-pits-brother-against-brother/)

Posted by Randy Buchman on May 23, 2012 in Sesquicentennial Series and tagged Battle of Front Royal, Stonewall Jackson.