I am sure that as I write my way through this blog upon Civil War themes, some who read it are going to think from time to time, “You’re just learning that now?”  Ah … yep … I’m probably late to the table on a lot of things!  I’m just a good old boy here – learnin’ a wee bit and writin’ it down as I go.

On a recent trip through Virginia, while driving north on Route 29, I saw a sign about visiting historic downtown Chatham. So … hooked me! (I’m a pretty simple guy!)  I exited the highway and drove into town to see what was historic about it. A town web site says: “Chatham was established as a town in 1777 during the turbulent years of the American Revolution. Chatham has been affectionately called the ‘Prettiest Little Town in Southside Virginia.’ It has also been called the hub of American architecture by some, as she boasts a fine representation of pre-Revolution, Federal, Victorian, and post-Victorian architecture.”

Among items I saw was the impressive Hargrove Military Academy for boys – dating back to 1909. And I’ll have another post in July on the home of Lt. Col. Rawley W. Martin, who led the 53rd Virginia on Pickett’s Charge at Gettysburg. 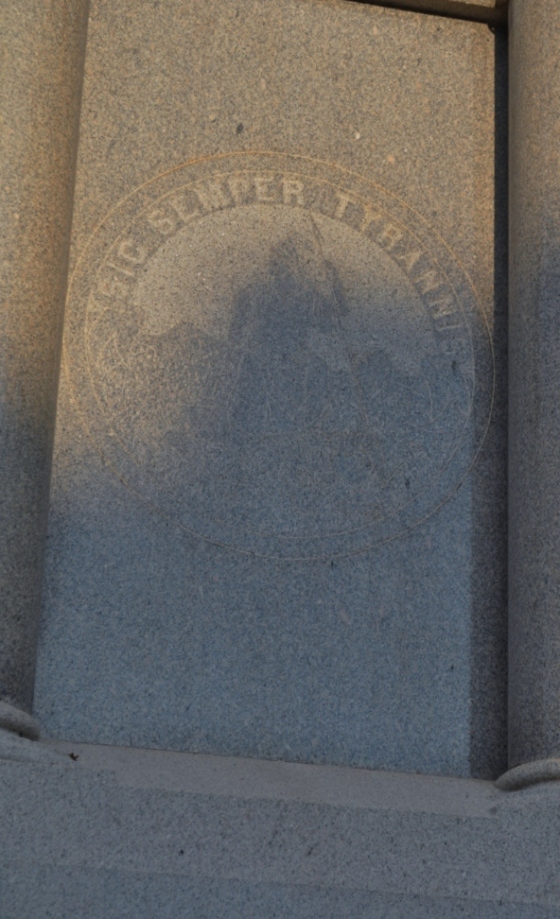 In the downtown I stopped to view a Civil War monument to these Confederate soldiers of Pittsylvania County. On the side of the monument was a seal with the statement “sic semper tyrannis.”  I associate those words immediately with the utterance of John Wilkes Booth – upon the assassination of President Lincoln as he hit the stage and broke his leg. What I did not know (that likely lots of you scholars out there know – remember, I’m from New Jersey) is that this is the motto of the state of Virginia.

The Latin phase most often is translated as “thus always to tyrants,” though it has at times been wrongly construed to mean “down with the tyrant.”  (This is why it sort of caught my eye in Virginia – almost like a post-war statement about the lingering view of the “late unpleasantness” of that “war of northern aggression” … when all it really is about is the state motto.)

The phrase is also attributed to Marcus Brutus in connection with the assassination of Julius Caesar on March 15, 44 BC.

(Odd things at no extra charge: The saying is also the motto of the city of Allentown – where my wife grew up …. And Timothy McVeigh was wearing a T-shirt with a picture of Lincoln and these Latin words on it when arrested on the day of the Oklahoma City bombing.)