A Visit to Danville, Virginia

It was 147 years ago this coming week that the Confederacy was struggling through its final days. Richmond was about to fall, and it was 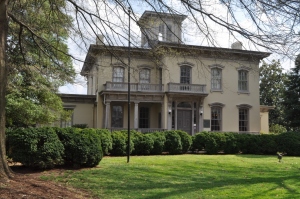 necessary to remove the government south to the next largest city – Danville, Virginia.  It is difficult to imagine this now, but on a line from Richmond to Atlanta, Danville was the largest city. This town, and the Richmond and Danville Railroad, was the main supply route for the Confederate army at Petersburg.

I recently drove through the city and stopped at the Danville home of tobacco entrepreneur Major William T. Sutherlin, best known as the Last Capitol of the Confederacy. Though I will save the bulk of my remarks on Danville for a post at this season in 2015, let me say here now that this museum house is really worth a visit.

The home hosted Jefferson Davis from April 3rd through 10th, and was the final location of Confederate Cabinet meetings and communications. Davis occupied a rear bedroom – to ostensibly facilitate a rapid departure if necessary.

The museum offers an introductory video that is quite good, after which you are given a portable CD player to carry with you throughout the house from stop to stop on a tour at your own pace. 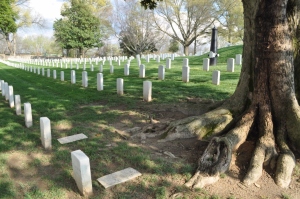 Beyond visiting the home, I also went to the national cemetery where there are well over 1,000 Union soldiers buried. Danville housed over 7,000 prisoners – mostly in six tobacco warehouses converted into prisons (I’ll picture the only remaining building). Disease claimed many lives, especially in the winter of 64-65.

While in the cemetery, I chose to take a dozen or so pictures of various individual gravestones, with the goal of researching those names to discover their stories toward enhancing a blog posting on this cemetery. While doing so, I stumbled across our most common family ancestral name – “Romig.”  A cursory historical look would seem to have this Pennsylvania fellow outside the main line of the family (from PA), but I will continue to dig out more specifics. I do know he was captured in a particularly disastrous event for the Union at Petersburg, and died months later at the height of disease in the Danville Prisons.