(As I have written in the page you may reference at the top of the blog, I have a special research interest in Abner Doubleday. This material is from that body of work.)

Abner Doubleday was one of the major figures involved with the onset of the war, being stationed in Charleston, S.C. as a Captain of artillery. He sighted the cannon firing the first shot from Fort Sumter in response to the Rebel attack upon that installation in April of 1861.

After returning to New York, Doubleday was soon connected with the movements of Banks and Patterson through the Cumberland Valley, Washington County Maryland, and into northern Virginia and Harpers Ferry. These troops were not involved in the Battle of First Manassas/First Bull Run.

The Defenses of Washington

At the end of August of 1861, Doubleday’s artillery command of heavy guns was ordered moved to the defenses of Washington. On August 30th came special orders from McClellan charging Doubleday with commanding the heavy artillery defenses from the Long Bridge to Fort Corcoran. In the event of an attack, it was stated he was “to command the whole.”[1]  Doubleday found this command puzzling, in that he was a mere Major, and these forts were under the command of Lieutenant-colonels, Colonels and general officers. He wrote: I construed the order there to mean, not that I was to assume actual command over my senior in rank, but that I was to arm and equip the forts properly, and have them ready for defense as soon as possible.  Upon presenting my orders to General McDowell, he bowed very low in burlesque manner, and intimated to me that he considered the order an absurdity. [2] 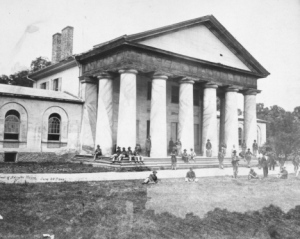 Arlington House During the Civil War

However, Doubleday went to work on the project, making his headquarters in Arlington House—the former plantation home of Robert E. Lee. With a single orderly from the 14th Brooklyn Regiment working for him, he began to make the necessary requisitions of supplies and ordnance to place the forts’ artillery in working order. At the time of his commencement upon this task, the forts were in a very incomplete state, with ammunition in two magazines quite some distance from the actual fort locations. The entire project consumed Doubleday’s efforts for the remainder of 1861 and into the early months of 1862. The army engineers had also laid out a series of new forts from Albany to Alexandria—thus encircling the city. Doubleday was ordered to also deal with the armaments for these installations. All of this fortification involved a considerable expense.  The total perimeter was about 35 miles and involved an armament of some 480 guns manned by 7200 men. By the end of the year, the Brigadier General and Chief Engineer of the Defenses of Washington, J.G. Barnard was able to write to Secretary of War Stanton that “there has been but one other system of field works that I know of that is analogous to this in extent and character–the famous lines of Torres Vedras. These frustrated the design of Napoleon of driving the English from the Peninsula [in Portugal]. They consisted of a greater number of works, but the works were smaller, and much less expensive in workmanship …” [3]

Testimony before The Joint Committee on the Conduct of the War

Doubleday was not nearly so impressed with the condition of the forts, according to his testimony before “The Joint Committee on the Conduct of the War” on January 3rdof 1862. This committee had been established only a month previously (in the wake of the Army’s embarrassing disaster at Ball’s Bluff), and was chaired by the Radical Republican Benjamin Wade of Ohio. With Republicans in control of the Congress, the “War Committee,” as it was commonly known, was comprised of five Republicans and only two Democrats. Throughout the war, the Committee expressed criticism of tactics lacking aggressive initiative, and of military commanders like McClellan and Meade—whom they lobbied to see replaced. The members of the War Committee questioned Doubleday on the condition of the forts defending Washington, to which he answered that they were insufficiently manned and garrisoned with artillerists. When prodded to answer why this condition existed, Doubleday replied that he could not

understand why it had not been specifically addressed. He reported of his repeated efforts toward seeing this accomplished, but such had not come to fruition. Doubleday answered in the affirmative that there seemed to be many greater efforts applied to infantry over artillery, even though there were many regiments interested in becoming heavy artillerists. Though men could be trained to load and fire within a few days, it would require two to three months for them to gain a skilled level of proficiency. When asked specifically if General McClellan knew of this lack of sufficient manpower, Doubleday replied that the situation had been made known repeatedly to his Adjutant General and to his Chief of Artillery. But Doubleday frankly stated: “I do not see anything being done to remedy it.” The line of questioning turned to address the broader issues of the war effort, and Doubleday was asked his opinion upon these matters as a military man. Regarding the wisdom of a movement of the Army of the Potomac at that season versus at a later date, Doubleday opined that a movement ought not to be delayed, in that hesitation allowed the enemy to fortify. When queried as to what he would suggest as an appropriate movement of the Army of the Potomac, Doubleday spoke of the viable strategy of advancing the force into Virginia at Leesburg in an effort to attack the left flank of the Confederate forces. Such testimony, though appealing to the leading members of the War Committee, surely did not endear Doubleday with the predominant culture of Democrats in the Army. [4]

On February 3rd of 1862, Doubleday was commissioned as Brigadier General of Volunteers. At the end of the month, General McClellan assigned him to duty as inspector of all the military defenses of Washington, with particular command of those to the north and east of the Potomac. Among a number of men from New York whom Doubleday chose to serve on his staff was his brother Ulysses, a Major of the Fourth New York Heavy Artillery. The new General assigned him the position of ordnance officer. Another significant addition to his staff was an eloquent lawyer from Portland, Maine named George F. Noyes, who at Doubleday’s request was appointed a captain in the Commissary Department. Noyes would eventually serve with Doubleday for some time, and would write an 1863 memoir of their experiences together entitled The Bivouac and the Battlefield; or, Campaign Sketches in Virginia and Maryland. Noyes’ skill with words is most evident in this picturesque writing. It begins with a dedication page “to Major General Abner Doubleday, U.S. Vols., and his first staff, this record of our common experiences is affectionately inscribed by the author.”  Doubleday’s name never again appears in the narrative, but he is always warmly spoken of rather as “the general” or “our general.”

Abner Doubleday was busily occupied through the middle of May, inspecting all the forts surrounding Washington, and in drilling and disciplining the troops of the forts to the north and east of the city. [5]

(Check back again in early April for a compelling story on Doubleday’s views on dealing graciously with former slaves.)