Abraham Lincoln was not perfect. But the more I read about him, the more I am amazed at his talents and judgments. The tasks before him were often completely inscrutable – the ultimate presidential conundrum weighing varied and equally unpopular and controversial choices.

In my previous post in this sesquicentennial series (January 13th), I wrote of his choice of Stanton – such a bold and unexpected move, given their polarities of personality, affiliations and backgrounds. And of course, a major challenge for Lincoln was how to handle and deal with

General George B. McClellan – who was a man who brought both significant assets and major liabilities to the table. It is my view that Lincoln gave McClellan every opportunity to succeed (even within some limiting parameters), and that the President tolerated the General’s eccentricities well beyond a reasonable level of forbearance.

In January of 1862, the Confederate force was camped just outside Washington at Manassas Junction, Virginia, while the Army of the Potomac was organizing and training – though sitting, under a lead general suffering with typhoid. Lincoln is oft quoted as saying on 1/10/62 to Quartermaster General Montgomery Meigs, “What Shall I do? The people are impatient, Chase has no money and he tells me he can raise no more, and the General of the Army has typhoid fever. The bottom is out of the tub. What shall I do?”

Meigs’ answer was to consult with some of the other major generals, which Lincoln did in coming days with Irvin McDowell and William Franklin. Within three days of this initial set of meetings, McClellan had rallied enough to attend a gathering on the 13th. He assured all that he had a plan, though was reticent to reveal its detail. Even as this heartened Lincoln, after several more weeks of uncertainty and minimal appearance of action, the President employed his position as Commander-In-Chief to begin to write some war orders. These were, of course, with a view toward goading some action.

Special War Order No. 1– issued 150 years ago today on 2/1/62 – called for a specific action of the Army of the Potomac to move directly to the southwest against the enemy at Manassas Junction. 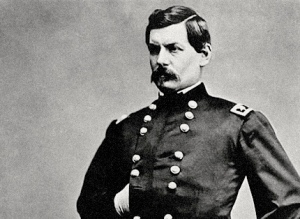 These orders came in the midst of McClellan’s activity with his own very different plan to float the army down the Chesapeake and land 50 miles east of Richmond. There, a major flanking assault on the Confederate Capital would draw away the threatening Rebel forces from outside Washington, and a successful operation put an end to the Rebellion.

Lincoln clearly preferred the frontal assault, and on February 3rd wrote to McClellan in summary of the situation, “You and I have distinct, and different plans for a movement of the Army of the Potomac—yours to be down the Chesapeake, up the Rappahannock to Urbana, and across land to the terminus of the Railroad on the York River—mine to move directly to a point on the Railroad southwest of Manassas.”

Lincoln then posed a series of questions to the General – about the expenditure of time and money, the length and quality of lines of supply for each army from their base, and the expectations for success. Ultimately, while retaining a dubious assessment regarding McClellan’s plan, Lincoln would yield to the military professional, resulting eventually in the Peninsula Campaign.