How do we interpret General George B. McClellan? This is a challenge for us as Antietam Battlefield Guides, though the challenge is not a new one. The men of Lincoln’s Administration held varied opinions, as did Congress, as did the officer corps, and as have historians ever since. 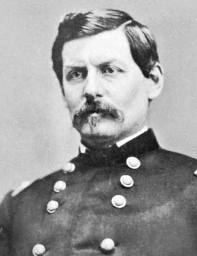 There is a pervasive narrative that McClellan was overly cautious, slow, fearful, and bumbling. Material exists to feed this position. Yet, a substantial body of more recent scholarship has taken a less harsh tone in evaluation, seeking (and finding in the historic record) cause for a significantly more balanced approach.

The controversy rages on just a bit among the members of the Antietam Battlefield Guides, who have a good-natured ongoing discussion upon this subject!

There is no doubt that the leader of the Army of the Potomac was well-loved by the vast majority of the troops he commanded. And perhaps that affection was never more largely felt than in the week preceding the Battle of Antietam.

Accounts are bountiful of the very public expressions of common soldiers upon the sight of their lead commander. Here are but three of these stories, and if you read to the end of the final quote, even there – you are able to see the seeds of the enigma.

George Kimball of Boston served in the 12th Massachusetts of Rickett’s Division within the 1stCorps, and

“Men threw their caps high into the air, and danced and frolicked like school-boys, so glad were they to get their old commander back again … The climax seemed to be reached, however, at Middletown, where we first caught sight of the enemy. Here, upon our arrival, we found General McClellan sitting upon his horse in the road … As each organization passed the general, the men became apparently forgetful of everything but their love for him. They cheered and cheered again, until they became so hoarse they could cheer no longer … A great crowd continually surrounded him, and the most extravagant demonstrations were indulged in. Hundreds even hugged the horse’s legs and caressed his head and mane. While the troops were thus surging by, the general continually pointed with his finger to the gap in the mountain through which our path lay. It was like a great scene in a play, with the roar of the guns for an accompaniment.”[1]

Another scene from Middletown, Maryland (about 10 miles from Antietam) was recorded by a Private H.W. Burlingame of the 104th NY Infantry of Hooker’s 1st Corps…

“…We began to hear cheering away in the rear of us, it kept growing nearer and increasing in volume and we all fell to wondering what the cause of it all was. Soon we began to see the men throwing their caps into the air and cheering with all of their might. The cause of the tumult soon became apparent. General McClellan with his staff officers came riding down the pike, his hat in his hand, bowing and smiling as he passed through the line of men on either side of the road.”[2]

Here also is a third account – probably from a day or two before the first quotes – from Frederick Hitchcock, a rookie soldier in the 132nd PA (2nd Corps) …

Frederick Hitchcock of the 132nd PA

“On our third day’s march we were halted for rest, when an orderly rode through the lines saying to the different colonels, ‘General McClellan will pass this way in ten minutes.’  This meant that we were to be ready to cheer ‘Little Mac’ when he came along, which, of course, we all did. He came, preceded by a squadron of cavalry and accompanied by a very large and brilliantly caparisoned staff, followed by more cavalry. He was dressed in the full uniform of a major general and rode a superb horse, upon which he sat faultlessly. He was certainly a fine-looking officer and a very striking figure. But whether all this ‘fuss and feathers’ was designed to impress the men, or was a freak of personal vanity, it did not favorably impress our men. Many of the old vets, who had been with him on the Peninsula, and now greeted him again after his reinstatement, were very enthusiastic. But notwithstanding their demonstrations, they rather negatived their praises by the remark, ‘No fight today; Little Mac has gone to the front. Look out for a fight when he goes to the rear.’” [3]

The application point to be taken from all of this is to be reminded that all great men have, yes, great capabilities, but ALSO often many great liabilities. The challenge in leadership is to maximize strengths while delegating in areas of weakness with trusted cohorts.

Our job as historians and guides is to be fair to the full record, evaluating the merits and weaknesses of our forebears, and learning those timeless lessons that yield application to our own day and contexts.

[1] pp. 550-551 of “North to Antietam: Battles and Leaders of the Civil War” by Robert Underwood Johnson